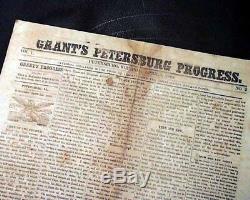 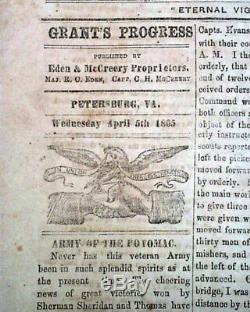 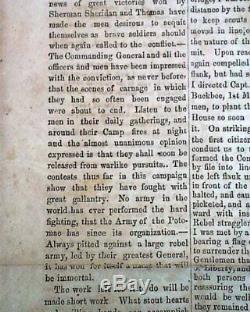 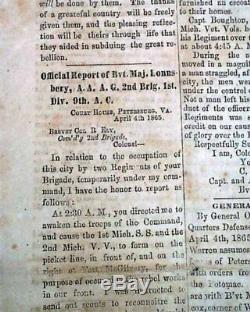 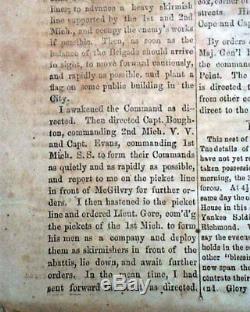 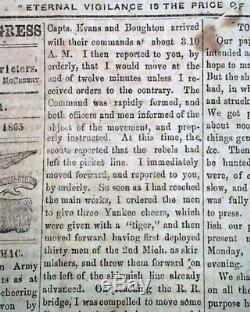 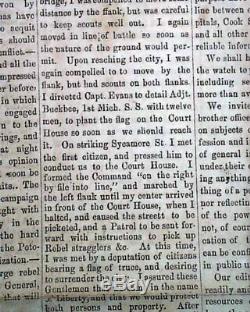 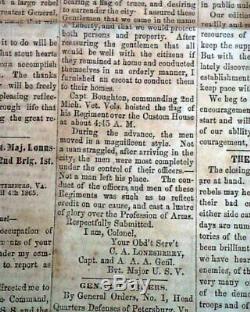 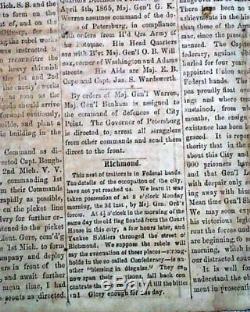 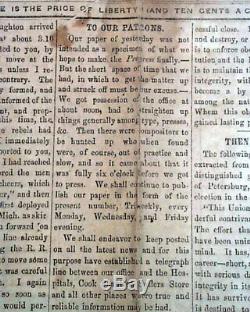 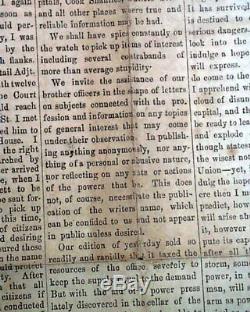 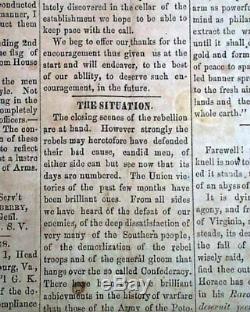 Shown is an original & historic old newspaper, offered to enhance your collectible interest: GRANT'S PETERSBURG PROGRESS, Petersburg, Virginia, April 5, 1865 Extremely rare military title General Ulysses S. Grant The Siege of Petersburg ending Civil War coming to an end An exceedingly rare newspaper and the first we have had the opportunity to offer. This newspaper lasted but four issues, printing on April 3, 5, 7 and 10 of 1865 by officers of the 37th Wisconsin Volunteers and the 8th Michigan Veteran Volunteers. As the title suggests, its purpose was to report the closing days of the Confederacy as Grant's Army of the Potomac was advancing upon Petersburg and Richmond. The content is simply terrific. The editorial near the top of page 1 begins. Never has this veteran army been in such splendid spirits as at the present time. The cheering news of great victories won by Sherman, Sheridan, and Thomas have made the men desirous to acquit themselves as brave soldiers.. This is followed by a letter which details the actual possession of Petersburg by the Yankee forces, taking just over a full column. Is an article: "Richmond" which begins. This nest of traitors is in Federal hands. The details of the occupation of the city have not yet reached us.

We learn it was taken possession of at 8 o'clock Monday Morning... There is also a very interesting letter: "To Our Patrons" by the printers, stating how this newspaper came into existence (records show they occupied the press of the "Daily Express" newspaper), and how they gather their news, and intend to keep printing tri-weekly.

This is followed by: "The Situation" which begins. The closing scenes of the rebellion are at hand... Its death knell is now tolling. Palsied, exhausted it stands trembling on the verge of an abyss of oblivion and turpitude.

It is dying, lingeringly and in agony... The Confederacy is dead--dead to all intents and purposes--though its convulsive death-throes may last yet a little longer... There is a tongue-in-cheek article: How Are You Jeff! " followed with an article headed: "Failure Of Grant's Campaign!!!! The above is the caption of an article in the Richmond Whig and will take its place along with the unfulfilled prophecies of history... All that singularly, ineligible and worthless property known as THE SOUTHERN CONFEDERACY. For particulars apply to Jefferson Davis, Richmond, Va. The back page is mostly taken up with: "Petersburg and Its History" but also has the: "Oath Of Parole" for Petersburg residents who want to travel outside the city. Complete as a single sheet newspaper, 12 by 19 inches, two folds, some foxing more so to the bottom quadrant of the ftpg.

Generally in very nice condition with no wear, loss, tears or other disfigurements to speak of. Please Note: All of our offerings are 100% authentic! We do not offer reprints or reproductions of any kind. They are guaranteed to be original!

For this specific item, A U. The per-item additional cost for folders, portfolios, and presentation cases vary. We will still provide tracking and insure them at our expense. Please check with your country's.

We have been dealers in rare newspapers for over 43 years, serve as consultants to multiple museums, and are members of the American Antiquarian Society. Timothy Hughes Rare Newspapers P.

Desiring to conduct ourselves honorably in all things. Were it left to me to decide whether we should have a government without newspapers, or newspapers without a government, I should not hesitate a moment to prefer the latter. The item "Very Rare CIVIL WAR General Ulysses S.

Grant Siege of Petersburg 1865 Newspaper" is in sale since Thursday, December 22, 2016. This item is in the category "Collectibles\Militaria\Civil War (1861-65)\Original Period Items\Other Civil War Original Items". The seller is "timhu" and is located in Williamsport, Pennsylvania. This item can be shipped worldwide.