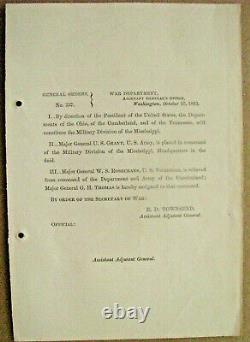 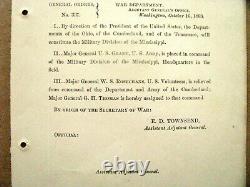 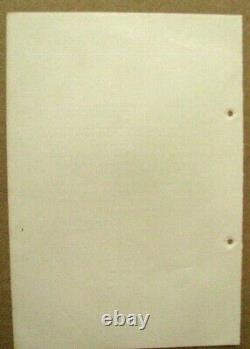 General Ulysses S Grant was an aggressive combat commander and won Abraham Lincoln's confidence by his constant action and victories at the Battles of Belmont, Missouri, Shiloh, Tennessee and Ford Donelson. Despite rumors and the jealousy of his superior Henry Halleck, Lincoln was impressed with his continuing victories at Iuka, and the Defense of Corinth, and promoted Grant to Command of the Department of Tennessee in October, 1862. An original Civil War General Order, issued by the War Department, Washington, October, 16, 1862 assigning General US Grant to the Command of the Department of Tennessee, to include Cairo, Fort Henry & Donelson, Northern Mississippi and the portions of Kentucky and Tennessee West of the Tennessee River. Soon after Grant assumed overall command of the Campaign against Vicksburg, Mississippi, and continued to rise in commands. The 1p 8 x 5 ptd General Order has edge wear, age stains, and 2 punch holes in the left margin, Overall VG. General & Special Orders were issued to communicate commands and information to the Army.

Each order, issued in writing by a command, was then printed for distribution to each unit, either at an army department headquarter or by commanders at local headquarters in the field on portable printing presses operated by soldiers. The orders were then issued to regiments, to be read aloud to the troops.

General Orders were printed as issued with date & location; at the end of a year the regimental adjutant might retain them loose or simply string bind them by punching holes or cut slits in the left margin and stringing on ¼ red cloth string tape (the source of the old expression "government red tape"). Sometimes an officer or HQ clerk might take a group of orders to a local print shop or bookbinder and have an accumulation bound with leather or cloth covers.

Usually, American Military Orders of the 19. Century including Civil War era were printed on an 8 x 5 sheet of quality rag paper.

General Orders and other imprints. All items are unconditionally guaranteed to be authentic and in the condition as described.

NOTE: Any repair to a paper item is listed. I use only museum curator approved archival repair tape. PLEASE READ DETAILS OF THE ITEM DESCRIPTION. I TRY TO DESCRIBE ALL ITEMS ACCURATELY. The item "US GRANT COMMAND GENERAL ORDER TENNESSEE CIVIL WAR" is in sale since Sunday, September 20, 2020. This item is in the category "Collectibles\Militaria\Civil War (1861-65)\Original Period Items\Documents". The seller is "99counties" and is located in Winterville, North Carolina. This item can be shipped to United States.