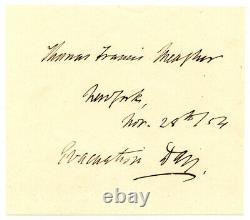 (1823-67) Union Brigadier General - New York; Governor of Montana Territory 1865-66. A native of Ireland, Meagher organized and led a Zouave company of the 69. New York Militia at First Bull Run. Promoted to brigadier early the following year, he organized the Irish Brigade, subsequently leading the unit in all the Army of the Potomac battles from the Peninsula Campaign through Chancellorsville, most notably in the charge on the Confederate position on Maryes Heights at Fredericksburg.

After the war, Meagher served as secretary and governor of territorial Montana. Signature , with place and date commemorating the evacuation of the British from New York City at the conclusion of the American Revolutionary War. Thomas Francis Meagher, New York, Nov[ember] 28. /[18]54, Evacuation Day.

On a 4 ¼ x 4 ¾ sheet. Excellent, with light, even toning. The item "THOMAS F MEAGHER, Civil War Union General/Montana Territory Gov, Autograph 8325" is in sale since Saturday, November 28, 2020. This item is in the category "Collectibles\Autographs\Historical". The seller is "lamag" and is located in Fort Lauderdale, Florida. This item can be shipped worldwide.