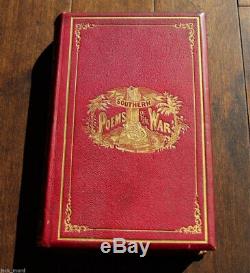 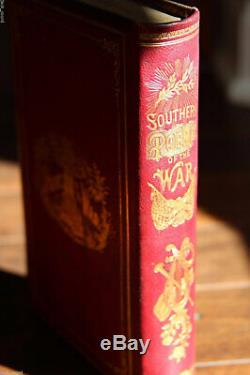 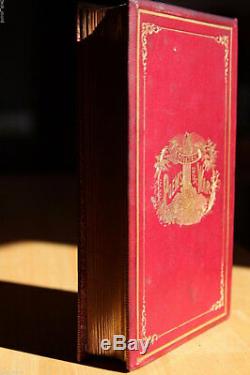 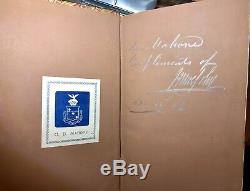 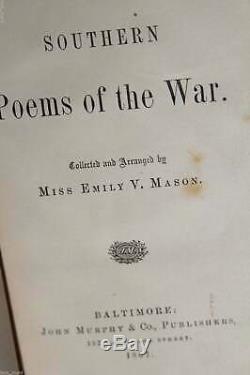 Original 1866 first edition of "Southern Poems of the War". I picked up a small collection of Mahone family items, including rare photos of the family, and this book.

The book is a 7.75" x 5" hardcover, red pebbled leather covered and gilt page edges. This book was the property of the Confederate General William Mahone, and his wife Otelia, a Civil War nurse. Her original owner's sticker is inside the cover.

My photo of it came out a bit blurry, but it it reads, O. Mahone (for Otelia Butler Mahone) beneath a family crest. [A long bio of the General, found online, is at the bottom of this listing]. The book was given to Mahone as a Christmas gift; It is signed in original pencil. I cannot read the signature, it's very possibly some well-known Southern politician or military figure. At one time I owned several rare items from the Mahone family estate. Including rare photos and heirlooms - this book is the last of the items. Xcellent antique condition with only very light wear, and is complete and intact. He is best known for turning the tide at the 30 July 1864. Attack on Petersburg, and is called the hero of the Battle of the Crater. General Mahone was a civil engineer who helped build Virginia's. Railroads before and after the Civil War.

The history of the Norfolk and Western Railway began with the City Point Railroad , a line running. 9 miles from City Point, Virginia to Petersburg, Virginia. A supply line from Grant. After the War, this line also became part of the Southside Railroad.

William Mahone, a graduate of Virginia. Military Institute in Engineering, built the Norfolk and Petersburg Railroad becoming president of it in the pre-Civil War era.

Innovative roadbed through Virginias Great Dismal Swamp employed a log foundation laid at right angles beneath the surface of the swamp. General "Billy" Mahone married Otelia Butler of Smithfield, Virginia, who was said to be a well cultured lady.

Legend has it that they traveled. Along the newly completed Norfolk and Petersburg Railroad naming stations from "Ivanhoe" a book she was reading by Sir Walter Scott.

Names resultant included Windsor, Ivor, Waverly, and Wakefield. When they could not agree, it is said that the name Disputanta was created. After the war, William Mahone was the driving force in the linkage of N&P, Southside Railroad and the Virginia & Tennessee Railroad to form. The letters A, M & O were. Said to stand for All Mine and Otelia's.

Nd renamed it Norfolk and Western. Mahone arranged for the proceeds of the A, M & O sale to help founded a school for teachers next to.

His political activity will also follow shortly. After losing control of the A, M, & O.

William Mahone stayed active in the economic and political life of Virginia for almost 15 more years. He served as mayor of Petersburg. And became a United States Senator in Congress from Virginia.

The item "Southern Poems of The Civil War BOOK Property of Confederate General Wm Mahone" is in sale since Monday, February 17, 2020. This item is in the category "Collectibles\Militaria\Civil War (1861-65)\Other Civil War-Related Items".