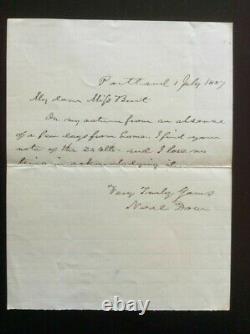 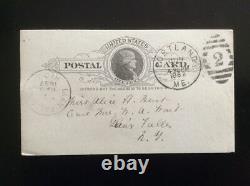 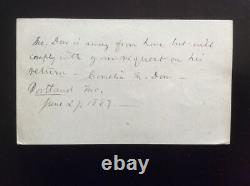 Neal Dow (March 20, 1804 - October 2, 1897) was an American Prohibition advocate and politician. Nicknamed the "Napoleon of Temperance" and the "Father of Prohibition", Dow was born to a Quaker family in Portland, Maine.

From a young age, he believed alcohol to be the cause of many of society's problems and wanted to ban it through legislation. In 1850, Dow was elected president of the Maine Temperance Union, and the next year he was elected mayor of Portland. Soon after, largely due to Dow's efforts, the state legislature banned the sale and production of alcohol in what became known as the Maine law. Serving twice as mayor of Portland, Dow enforced the law with vigor and called for increasingly harsh penalties for violators. In 1855, his opponents rioted and he ordered the state militia to fire on the crowd.

One man was killed and several wounded, and when public reaction to the violence turned against Dow, he chose not to seek reelection. Dow was later elected to two terms in the Maine House of Representatives, but retired after a financial scandal.

He joined the Union Army shortly after the outbreak of the American Civil War in 1861, eventually attaining the rank of brigadier general. He was wounded at the siege of Port Hudson and later captured. After being exchanged for Confederate General William Henry Fitzhugh Lee, son of General Robert E. Lee in 1864, Dow resigned from the military and devoted himself once more to prohibition. He spoke across the United States, Canada, and Great Britain in support of the cause. In 1880, Dow headed the Prohibition Party ticket for President of the United States. After losing the election, he continued to write and speak on behalf of the prohibition movement for the rest of his life until his death in Portland at the age of 93. Letter is dated July 1, 1887. It is addressed to a Mrs Bunt, acknowledging the receipt of her note.

He signs at the conclusion in black ink. Shows a horizontal fold at center.

Also comes with a postcard to the same Mrs Alice H Bunt, from Dow's wife, Cornelia, informing the woman of Dow's return for an autograph. It is signed by Cornelia Dow. Both items remain in very good condition! A fantastic item for the collector of historical military/political autographs! Also, a wonderful idea for a family member to add to their archives!

(Inventory: Autograph Closet; Envelope 8). This item is in the category "Collectibles\Autographs\Military". The seller is "ron-likes-history" and is located in this country: US. This item can be shipped worldwide.