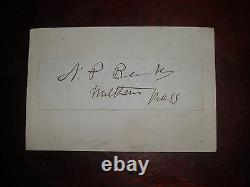 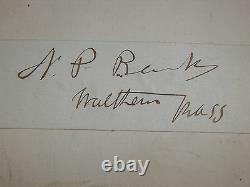 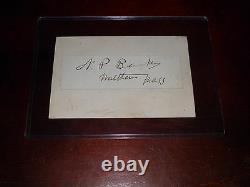 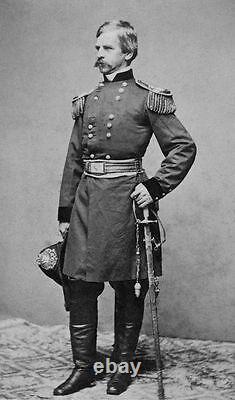 The following item is an authentic cut signature of Civil War Union Major General Nathaniel P. Banks was chosen by President Lincoln to be one of the first Major Generals of Volunteers in The Union Army in 1861. Banks had a number of different commands during The Civil War.

He was beaten twice by Confederate General Stonewall Jackson. His later assignments were at Washington D. Where he was in charge of defending the capital and as Commander of The Department of The Gulf. This cut signature measuring 4.75" by 1.5" is in very good condition. The signature is very bold and in dark period ink.

It is adhered to a larger card and comes with a protective plastic case. A very nice signature of this Civil War Major General.

Note:The last photo is of General Banks and is from an internet archive and is not included in this sale. The item "Signature Civil War Union Major General Nathaniel P. Banks" is in sale since Wednesday, September 9, 2015. This item is in the category "Collectibles\Autographs\Military".