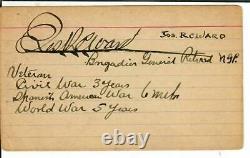 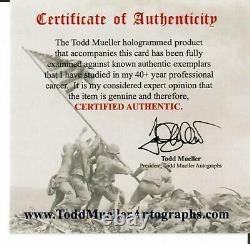 The son of Matilda and Colonel George Ward (who rose to the rank of Colonel in the Pennsylvania Militia), he counted among his uncles Richard Vanderhorst Bonneau, who was an 1852 West Point graduate, and who would serve a a Major in the Confederate Army during the Civil War. In the late 1850s and early 1860s he accompanied his uncle while he served on the western frontier as a Lieutenant in the Regular Army. When the Civil War started, he came home to Philadelphia to offer his services, but was repeatedly denied enlistment for being too young. After months of trying, friends intervened and convinced Colonel Turner G. Moorhead to allow him to enlist in his newly-raised 106th Pennsylvania Volunteer Infantry (at the time called the 5th California). Mustered in as a drummer boy (officially a Private and Musician) in Company I on August 24, 1861, he served through his regiment's campaigns until April 1864. At that time he applied to be assigned to the Cavalry Headquarters as an orderly. After initial rejection, he was assigned as he desired, and served in that capacity until July, 1864. During his tenure he sustained a slight wound at the Battle of Spotsylvania, served as personal orderly for Major General John Gibbon, and was promoted to Corporal. While awaiting official muster out, he was appointed as a member of the crew of the "USS Wyoming" in Philadelphia, but had to be discharged from the Union Navy after only two weeks, because the "Wyoming" was set to sail and he was not yet officially out of the Army. In April 1865, as the war was winding down, he joined the Pennsylvania Militia as a member of the Grey Reserves, which later became the 1st Pennsylvania National Guard regiment.

He embarked a long National Guard career, commanding troops in Scranton, Wilkes-Barre and Pittsburgh during the 1877 Railroad Riots, and rising to the rank of Brigadier General. In 1906 he published a history of the 106th Pennsylvania Infantry. This item is in the category "Collectibles\Autographs\Military".

The seller is "historicsellsmemorabilia" and is located in this country: US. This item can be shipped to United States.