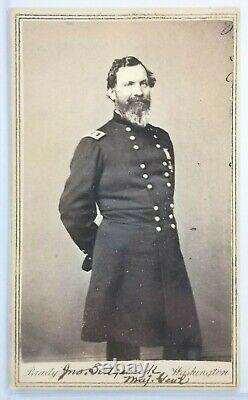 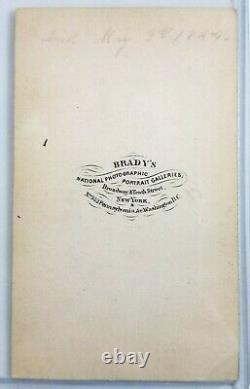 Original CDV of Civil War Union General John Sedgwick in rare full body length image with signature beneath and Brady name on front and studio stamp on back as well as handwritten'Died May 9th, 1864'. This CDV was part of vintage album including many CDVs of Union Army Generals (some signed), Abraham Lincoln, members of Lincoln's cabinet, Robert E. Lee (signed), politicians and a few notable writers and abolitionists during CW. The album was not salvageable but thankfully the photos were all in very good condition.

Sedgwick signature we are uncertain it's legit. He may have had difficulty squeezing his name within Brady and Washington print or it may have been signed for Sedgwick at time of photo - or later.

We have obtained a COA but received other opinions it is not Sedgwick's. As a result of conflicting opinions we are taking position signature is NOT Sedgwick's, though it MAY be and is from that period. The differing opinions makes photo even more interesting in our opinion. Please zoom in on all pics as part of description and ask questions. We welcome inquiries and want new owner to be pleased with their acquisition.

Follow our store our feedback is spotless and we focus on rare and unique. About Sedgwick (from Today In History). One of Connecticuts most influential Civil War figures, Major General John Sedgwick, was born in Cornwall in1813.

After attending prestigious academies in Sharon and Cheshire, Sedgwick attended West Point and graduated as a member of the Class of 1837 alongside several other future generals who would serve on both sides of the Civil War, including Joseph Hooker for the Union and Braxton Bragg, John Pemberton, and Jubal Early for the Confederacy. Sedgwick was a career military officer, serving in several posts across the United States and its western territories in the decades leading up to the Civil War.

He fought with distinction in the Seminole Wars in Florida and in the Mexican-American War before leading cavalry expeditions during the Indian Wars in the American west. When the Civil War broke out in 1861, Sedgwick led Union troops in actions throughout the eastern theater of the war and quickly achieved the rank of Major General. At the Battle of Antietam in 1862, he was shot three times and, after losing consciousness, had to be carried off the field by his men.

Sedgwick met his demise at the Battle of Spotsylvania Courthouse in the early morning hours of May 9, 1864, where he was supervising his men along the Union artillery line. His men were skittish, worried about incoming fire from Confederate snipers positioned 1,000 yards away. According to eyewitnesses, Sedgwick said to his men, Why are you dodging like this?

They couldnt hit an elephant at this distance, moments before being fatally struck in the head by a snipers bullet. Despite his ironic and poorly-chosen final words, Sedgwick was not an arrogant or reckless officer; he was beloved by the men under his command (who called him Uncle John) and admired as a reliable and experienced commander by his fellow officers. Major General John Sedgwick was the highest-ranking Union officer killed during the Civil War, and his death was considered a huge loss for the Union Army. Grant later remarked that Sedgwicks death was greater than the loss of a whole division of troops. Today, Sedgwick is remembered with statues and monuments in Connecticut, West Point, and at Spotsylvania National Military Park.

The item "Original John Sedgwick CDV Signed Union General Civil War Brady Photo" is in sale since Wednesday, May 12, 2021. This item is in the category "Collectibles\Militaria\Civil War (1861-65)\Original Period Items\Photographs". The seller is "thedealden" and is located in Glen Rock, New Jersey.