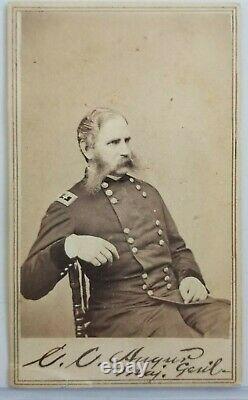 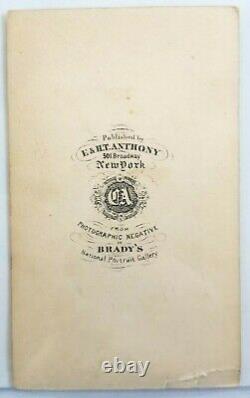 Rare Original CDV of Civil War Union General Christopher Columbus Augur. Anthony as Publishers of Brady Studio Photo stamp on back. This CDV was part of vintage album including many CDVs of Union Army Generals (some signed), Abraham Lincoln, members of Lincoln's cabinet, Robert E. Lee (signed), politicians and a few notable writers and abolitionists during CW. The album was not salvageable but thankfully the photos were all in very good condition. Signature we are uncertain it is legit and may have been signed for Augur or by someone in studio at time of photo. Informally comparing it to other Augur signatures it would not appear to be his. Therefore, we are going to state our position the signature is NOT Augur's, though it is from that period.

If others feel it is authentic that would be great but we are skeptical. But it does add some intrigue to the photo. We have not attempted to obtain a COA.

Condition very good there is slight crease lower left more visible from back than front. Please zoom in on all pics as part of description and ask questions.

We welcome inquiries and want new owner to be pleased with their acquisition. Follow our store our feedback is spotless and we focus on rare and unique.

About Augur:'Christopher Columbus Augur was born in Kendall, New York, on July 10, 1821, and grew up in Michigan. After attending West Point, he graduated 16th out of 39 in the class of 1861. When the Civil War broke out, Augur was ordered to Washington, where he helped organize the capital's defenses. In November of 1861, he was promoted to brigadier general of U.

Augur served as a brigade commander on the Rappahannock, leading a force that captured Fredericksburg on April 21, 1862. Given command of a division of Major General Nathaniel P. Banks' II Corps, he served under Major General Banks in Virginia and on the Mississippi. Just before the Second Bull Run, Augur was wounded severely at Cedar Mountain. Although Banks' corps was defeated by Major General "Stonewall" Jackson, Augur was cited for gallantry, and promoted to the rank of major general.

After recovering from his wounds in November, 1862, he was sent to New Orleans, where Major General Banks requested him to serve as his second-in-command. Augur's last field service was in the Mississippi River campaigns of 1862-63, where he commanded the District of Baton Rouge in 1863. He led the left wing of Banks' corps, which succeeded in capturing Port Hudson after the fall of Vicksburg.

From October 1863 to the end of the war, Augur commanded the XXII Corps and the Department of Washington, D. After the war, he remained in the Regular Army, retiring in 1885 with the rank of brigadier general. Augur died in Washington, D.

The item "Original Christopher Augur CDV Signed Union General Civil War Brady Photo" is in sale since Wednesday, May 12, 2021. This item is in the category "Collectibles\Militaria\Civil War (1861-65)\Original Period Items\Photographs".