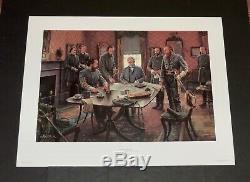 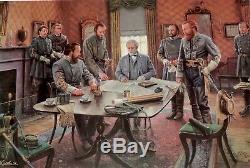 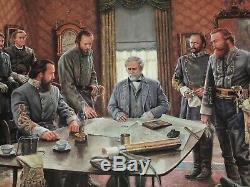 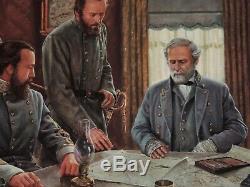 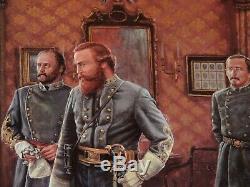 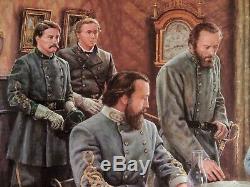 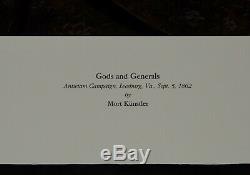 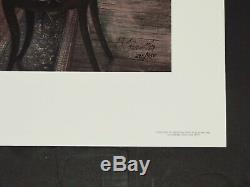 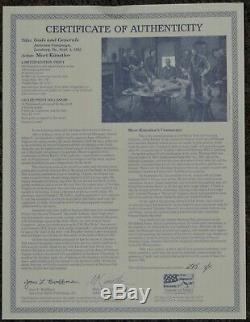 (Pictured are Generals Lee, Jackson, Longstreet, Stuart, & Armistead). The Country's foremost Civil War Artist. It was a meeting that could determine the outcome of the war. After a brilliant victory at the battle of Second Manassas, General Robert E.

Lee intended to lead his newly organized Army of Northern Virginia into enemy country. He would attempt to shift the focus of the war in the east from his beloved Virginia and take the fighting to the North. Along the way, he hoped to enlist crucial support from Southern sympathizers in Maryland and perhaps even provoke official recognition of the Confederacy by Great Britain.

If he could win a major battle on northern soil - in Pennsylvania - it might even be enough to end the wars unprecedented bloodshed and gain independence for the South. That was Lees vision as he moved his mighty and victorious army northward toward the Potomac River, Maryland and the North. At Harrison Hall, a palatial antebellum home in Leesburg, Virginia, the General convened a council of war.

Despite being injured in a fall, Lee was again the master strategist and daring risk-taker. He had divided his forces to move quickly northward and to secure his rear. Soon the mighty Army of Northern Virginia would be reunited - but until that occurred the army would be vulnerable to destruction. It was a risk that Lee felt was worth taking.

His adversary, General George B. McClellan, could be expected to move cautiously, and Lee intended to reunite his forces before McClellan could seize the opportunity to strike. All would be well if Lees daring gamble remained undiscovered by the enemy. Assembled with their staffs at Harrison Hall were Lees lieutenants. Present was General Thomas J. Stonewall Jackson - Lees right arm - who had superbly executed Lees strategy at the battle of Second Manassas with devastating, hammer-like blows. There, too, was General James Longstreet - whom Lee would praise as his Old War Horse. Also present were General J. Stuart, Lees cavalry commander - who was treasured by Lee as the eyes of the army - and Brigadier General Lewis Armistead, who had helped save the day for Lees army at the battle of Malvern Hill. Of those four generals summoned by Lee for counsel at Harrison Hall, General Longstreet alone would survive the war, and he would do so with a severe wound. Ahead too lay what Lee feared most for his army: General McClellan would discover Lees strategy, and the Army of Northern Virginia would be threatened with annihilation at the Battle of Antietam. It would be the bloodiest single day of fighting in this bloodiest of all American wars - and it would end Lees attempt to win the war in 1862. All that lay ahead, however, and for the moment, convened in council at Harrison Hall, were the Souths best and brightest.

This is an ORIGINAL hand signed and numbered limited edition print. Stored Flat - Protected - Never Framed. Comes with original certificate of authenticity. WE HAVE A LARGE INVENTORY OF CIVIL WAR PRINTS. BEFORE paying, request a revised invoice from us.

Custom Picture Framing is available. FRAMING FOX FINE ART GALLERY. Located In New Bern, North Carolina. I have been in business now for over 42 years.. The item "Mort Kunstler GODS and GENERALS Collectible Civil War Print" is in sale since Friday, June 28, 2019.