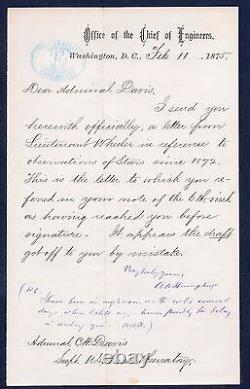 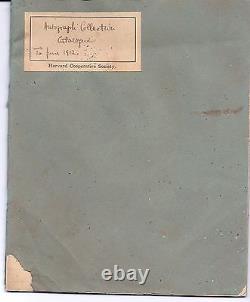 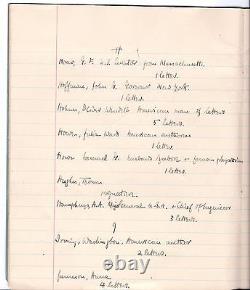 There is a fold down the the middle of the letter and a very small stain at the bottom edge. Andrew Atkinson Humphreys (11/2/1810-12/27/1883) Was a career United States Army officer, civil engineer, and a Union General in the Civil War. He served in senior positions in the Army of the Potomic, including Division Command, Chief of Staff and Corps Command. He was also Chief Engineer of the U.

Charles Henry Davis (1/16/1807-2/18/1877) Was a Rear Admiral in the United States Navy. In the Civil War he commanded the Western Gunboat Flotilla, winning an important engagement in the Battle of Memphis. This Manuscript letter signed by Major General A. Humphreys is from the papers of Stephen Bleecker Luce Jr. 1952 was an American Archaeologist.

The grandson and namesake of Admiral Stephen B. Luce, founder of the Naval War College in Newport, R. On his father's side and the grandson of Admiral Charles Henry Davis and nephew of Senator Henry Cabot Lodge on his mother's.

His papers include his own personal correspondence and photographs, but also, and of particular interest, it also included papers belonging to Admiral Davis. These papers include correspondence between Admiral Davis and assorted Secretaries of War and State as well as fellow Admirals and Generals who fought in the Civil War. Further, his papers contained letters from other important political leaders as well as literary, scientific and religious figures of his day. In addition to the papers of Admiral Davis, the collection also contained papers belonging to his Aunt, Anna Cabot Mills Davis Lodge, wife of Massachusetts Senator Henry Cabot Lodge.

These papers consist mainly of letters of acceptance or regret for dinner invitations or other get together's from important political leaders of the day. In 1912, Luce put together a inventory of his autograph collection which I provided some scans of for reasons of provenance. This item is in the category "Collectibles\Autographs\Historical". The seller is "parnassusonline" and is located in this country: US.