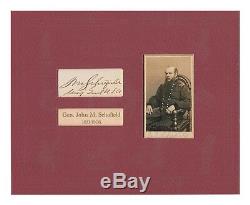 Schofield Civil War General Autograph - Authentic! A fine signed matted signature and rank (about 2 3/4" x 1 1/4" w/out matte; about 8" x 10" w/matte)'J M Schofield - Major General - USA'! What a fine piece of Civil War History to add to your collection! John McAllister Schofield (18311906) was born in Gerry, New York. Following his 1853 graduation from the United States Military Academy at West Point, Schofield served for two years as an artillery officer and then procured teaching positions at West Point and Washington University at St.

With the outbreak of the Civil War, he was appointed chief of staff to Brigadier General Nathaniel Lyon. Schofield would ultimately be awarded with the Medal of Honor for conspicuous gallantry displayed at the Battle of Wilsons Creek in August 1861. Promoted to Major General of Volunteers in November 1862, Schofield was made the commander of the Department of Missouri in 1863.

Taking command of the Army of the Ohio in 1864, he repulsed Confederate General John Bell Hood at the Battle of Franklin on November 30, 1864, and then assisted Major General George H. Thomas two weeks later in the victory at the Battle of Nashville. Schofield's war accomplishments were concluded with the occupation of Wilmington, North Carolina, on February 22, 1865, and the successful linkage of his forces with those of Major General William T. Sherman at Goldsboro, North Carolina, on March 23, 1865. In the years that followed, Schofield served as the Military Governor of Virginia (18671868), U.

Secretary of War (18681869), Superintendent of West Point (18761881), and Commanding General of the United States Army (18881895). Please note: I will gladly consider any serious, close offers. Please write with any questions. Schofield Civil War General Autograph Authentic" is in sale since Tuesday, February 16, 2016. This item is in the category "Collectibles\Autographs\Historical".