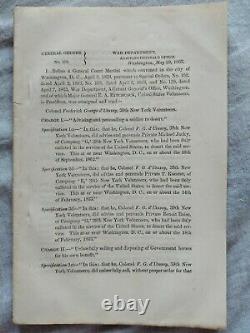 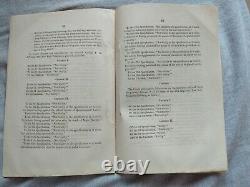 An original War Dept court-martial General Order, May 29, 1863, listing the charges against Frederick George D. (alias for Frederick Strasser) with details of his misdeeds and findings. G ood condition; Slight separation affecting a few pages by the spine. The post below is by Caitlin Eichner, a Shapell Roster Researcher. Served as a Captain in the 39th NY Infantry and Carl von. Served as 1st Lieutenant under their older brother. And by a stroke of luck, Carl's widow applied for a pension- providing us, a century and a half later, with proof that the three. Boys were really the Jewish Strassers. Applied for a pension in 1892, twenty-one years after Carl's death. To prove her status as Carl's widow, she contacted the US Consulate to Austria-Hungary in Vienna for help gaining official records. The record of Carl and Bertha's marriage was found in the Marriage Record of the Civil Recorder's Office "of the Jewish Confession, of the 10th Ward of the City of Warsaw, " stating that a ceremony was performed by the "Rabbi of the District and City Warsaw Cheim Davidsohn" on October 26, 1852. The names given of the two united were Carl Strass and Bertha Nelken, however- no form of the name. The final page of the marriage transcript submitted by the US Consulate is actually a deposition taken from two residents of Vienna- an attorney and a journalist- swearing that the Carl Strass or Strasser mentioned in the herewith annexed Certificate of Marriage, is identical with Carl von. And who with the sanction of the R. Hungarian Government has changed his name of Carl Strass or Strasser into that of Carl von. Based on this evidence, Bertha. Was granted her pension, and we were finally able to learn at least part of the truth about Frederick George d. Frederick, Carl, and Anton were most certainly brothers, so this primary source evidence is enough to show that all three left different identities behind in Hungary. This item is in the category "Books & Magazines\Antiquarian & Collectible". The seller is "vintagedocuments" and is located in this country: CA.