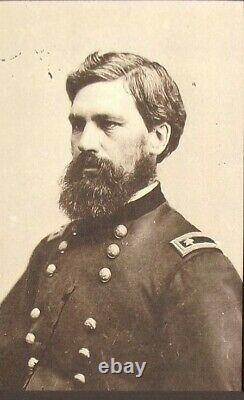 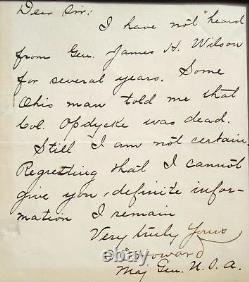 Oliver Otis Howard [1830 1909] was a career United States Army officer and a Union general in the American Civil War. As a brigade commander in the Army of the Potomac, Howard lost his right arm while leading his men against Confederate forces at the Battle of Fair Oaks/Seven Pines in June 1861, a action for which he was awarded the Medal of Honor. As a corps commander he suffered two humililating defeats at Chancellorsville and Gettysburg in May and July of 1863, but recovered from the setbacks as a successful corps and later army commander of the Western Theater.

Regretting that I cannot give you definite information. I remain Very Truly Yours. The letter is nicely signed''O. The page measures 5.00 x 6.00 inches, it has trivial toning, edge wear otherwise it is in fine condition. The letter is authentic, uncommon to obtain and will be a desirable addition to any Civil War collection.

Our policy is simple, all our autographs are researched and guaranteed authentic with''No'' time limits. Check out my other items. Be sure to add me to your favorites list.