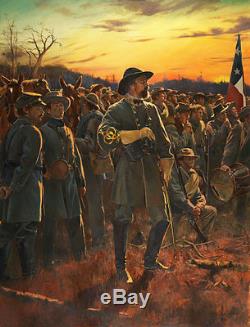 WE SUPPORT OUR TROOPS AND COUNTRY. THE ARTIST - Don Troiani DON TROIANI is a soul lost in time; a twentieth century artist to whom the life of the common soldier of the Civil War through the mid Eighteenth Century is as familiar and vivid as the surroundings of his Connecticut studio. While there are many other painters who have turned their attention to historical art, none have done so with the enthusiasm, insight and dedication of this accomplished recorder of drama and detail. In the spirit of presenting historical truth through art, Don Troiani has personally set uncompromising standards of excellence and authenticity in his field that few others can equal.

Models are chosen with the greatest care to achieve the proper look of the men in Colonial and Victorian America. The garb and gear of each figure are painstakingly researched.

Appropriate backgrounds are found and studied, sometimes sending the artist hundreds of miles from home to examine battlefields and structures firsthand. Because of the great amount of research that goes into one of his works, it is often years between a painting's conception and the actual moment the brush is put to canvas.

"If an historical painting is not reasonably accurate, then it's worthless both as art and as a historical document, " Troiani declares. If you are going to become involved in this field then there is little excuse for a pattern of inaccuracies. Indeed, Troiani's lifelong focus on America's military heritage enables him to present that subject with a credibility that surpasses his contemporaries. For a quarter century he has methodically built one of the great private artifact collections of Civil War, 1812 and Revolutionary War, World War II uniforms, equipage, insignia and weapons which he calls on to add the unique dimension of realism he is so well known for. An expert researcher with a personal Military library of over 2,500 volumes, he is assisted in his search for the truth by a select network of advanced collectors, curators and historians whom he corresponds with regularly and who open their own collections to him. Hollywood has enlisted him as consultant on "Civil War Uniforms and Equipage" for the acclaimed feature film "Cold Mountain" starring Nicole Kidman, Rene Zellweger and Jude Law for which he received screen credit. Also in Cold Mountain, The Journey from book to film. " Troiani has also been military advisor(and made appearances) on the A&E and History Channel's "Civil Journal" and the miniseries "The American Revolution. Televison appearances on "Missing Reward", "Incurable Collector", and "Hunt for Amazing Treasures" are among his credits. Don Troiani S/N Limited Edition Artist Proof Print "General of the Confederacy". Some were graduates of West Point, others had served as volunteers in the Mexican War and yet others had no military experience at all. Some bought their way in by raising regiments of volunteers or with political influence and others worked their way up through the ranks earning promotions based on hard fighting, natural leadership ability and experience. By 1863 most of the incompetents and political favorites had been weeded out, resigned or assigned to desk jobs leaving the real fighters to finish the war. Many were killed or wounded leading their men and others led productive lives as loyal citizens of a reunited nation. One of the greatest advantages of Southern armies was a cadre of excellent brigade and division leaders.

Men of the stamp of Patrick Cleburne, Nathan Bedford Forrest, John Brown Gordon, Stephen Dodson Ramseur and a host of others who earned their rank by merit, could have changed the course of the war had they commanded the great armies. This painting depicts Brigadier John Crawford Vaughn of Roane County, Tennessee in 1863.

Vaughn entered the service as a Captain of the 5. Tennessee Infantry in the Mexican War and in 1861 raised the 3. He fought at First Manassas and was afterwards commissioned a Brigadier General in September of 1862. Serving in the West he was forced to surrender with his brigade at Vicksburg, Mississippi. As Southern fortunes crumbled in 1865 his brigade formed part of the escort of President Jefferson Davis during his flight from pursuing Union forces.

After the war he held various political offices until his death in Georgia in 1875. In this painting by Don Troiani we see General Vaughn surrounded by his loyal Tennesseans observing the enemy during the Vicksburg campaign as the sun sinks in the sky. All Limited Edition prints are signed and numbered (S/N) by the artist and include a Certificate of Authenticity. Limited Edition prints are restricted to a certain number. For example, if 400 prints are made from an original painting, once theyre gone, thats it. There is no limit to the number of open edition prints of a particular painting. Thats why Limited Edition prints are more expensive and more valuable to collectors than "open" edition.

A remarque is a pencil drawing done in the white border area of an art print. The subject of the remarque is usually determined by the artist.

Each remarque is a piece of original art which adds to the value of the print by making that particular print unique and exclusive from the rest of the prints in the edition. All Limited Edition artwork is subject to availability at time of order. The item "General of the Confederacy Don Troiani Civil War Artist Proof Print" is in sale since Friday, November 15, 2013.

This item is in the category "Art\Art Prints". The seller is "airplanesandmore" and is located in Flower Mound, Texas. This item can be shipped worldwide.