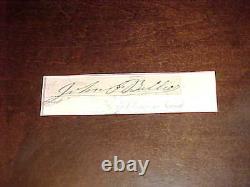 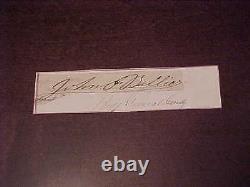 General John F Ballier Civil War Pennsylvania Legend German Born Autographed Cut, measures 1 1/4" x 5". This young German baker had all the ingredients of a great general. In Philadelphia is located today St. John's Catholic Church, still able to serve its congregation and its community through the long ago efforts of a German immigrant, a baker by trade, who once saved the church and went on to be one of the state's most distinguished soldiers of the Civil War.

Ballier was a native of Aurich, Wuertemberg, born on August 28, 1815 and immigrated as a baker to Philadelphia in 1838. The following year he became a member of the Washington Light Infantry, a crack German military organization composed of three companies, which would go on to serve its new country in pre-war conflicts such as the Native American riots of 1844 and the Mexican War of 1846. Throughout these military engagements, Ballier rose swiftly, achieving the rank of Major by the close of the Mexican War. In 1861, when President Lincoln called for volunteers to serve for ninety days, the Washington Light Infantry and John Ballier responded, forming the nucleus of the Twenty-first Regiment of Pennsylvania Volunteers for three months of service which saw his promotion to colonel. At the expiration of their time, Colonel Ballier recruited and organized the Ninety-eighth Regiment of Pennsylvania Volunteers for three years' service.

He led the command in many of the battles of the war, among them Yorktown, Williamsburg, Mechanicsville, Fair Oaks, Malvern Hill, Antietam and Fredericksburg. At Mayre's Heights in the Chancellorsville campaign, Colonel Ballier was wounded in the ankle and spent five weeks in the hospital. When Fort Stevens, a defensive bastion on the northern edge of Washington, D.

Was threatened, he was in command of the Second Division of the VI. Corps of the Union Army of the Potomac. Ballier and his men came under the watchful eyes of citizens who rode out in carriages to observe the battle, including President Lincoln. A rifle ball penetrated his thigh during the battle and during his subsequent hospital stay he was seen again by President Lincoln, this time at the foot of his hospital bed on July 12, 1864. Lincoln acknowledged his gallant conduct and the services of his troops, promoting Ballier brevet brigadier-general of volunteers. Pennsylvania Volunteers subsequently participated in several other battles, and was present at the surrender of Lee and his Confederate army. A complete history of the regiment was written by General Ballier for Bates's History of Pennsylvania in the War. While convalescing, General Ballier served for 10 months as a member of a court martial in Washington, acting on the cases of Confederate prisoners. He served on the tribunal that convicted Major Henry Wirz, Confederate commandant of the notorious Andersonville Prison camp and Ballier witnessed his hanging. In 1866 he was appointed a day inspector in the U. Custom House, resigning in 1867 when he was elected a City Commissioner of Philadelphia, holding that office until 1870. In 1869 he was Colonel of the Third Regiment Pennsylvania National Guard and retained command until 1876.

He was a founding member of the Cannstatter Volkfest Verein, president of the German Society of Philadelphia, and a founding member of the Grand Army veterans' Post #228, named for an old comrade, General John Koltes of Philadelphia, killed in action at the Second Battle of Bull Run. He died on February 3, 1893, mourned by his friends, family and comrades, and was buried in Mt. Peace Cemetery on Lehigh Avenue in Philadelphia.

Each Memorial Day, admirers of General Ballier gather at his grave and monument to honor him for his eminent career and heroic service. The item "General John F Ballier Civil War Pennsylvania Legend German Born Autographed Cut" is in sale since Sunday, March 15, 2015. This item is in the category "Collectibles\Autographs\Historical".