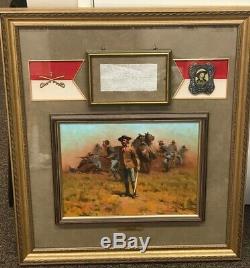 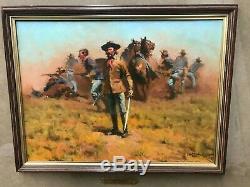 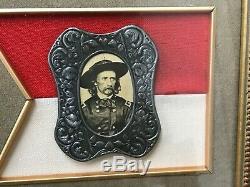 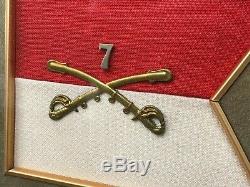 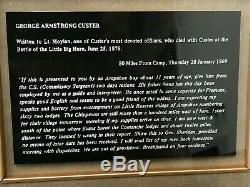 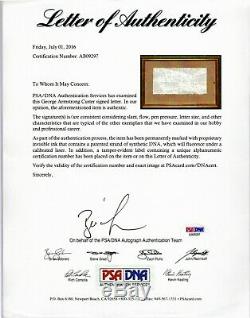 ALS, in bold pencil, 2 pages, 12mo, 80 miles from camp. Moylan, oen of Custer's most devoted officers, who died with Custer at the Battle of the Little Big Horn, June 25, 1876. Custer writes, If this is presented to you by an Arapahoe boy about 11 years of age, give him from C. (Commisionary Sergeant) two days rations. His father Nena, has this day been employed by me as a guide and interpreter. He once acted in the same capacity for Fremont, speaks good english and seems to be a good friend of the whites. The Chippewas are still more than a hundred miles west of here. I start for their village tomorrow morning if my supplies arrive on time. They located it wrong in their report.

Sheridan, provided no memo of later date has been received. I will send list of my men back tomorrow morning with dispatches. We are out of provisions.

ARTIST, DAN MIEDUCH, WHO PAINTED THE ORIGINAL ART ATTACHED TO THE FRAME. Dan Mieduch was drawing by the age of seven. During high school, he took evening art classes and began working in both oils and watercolors.

Dans family owned a tavern and motel in Clinton, Michigan. This farming community gave Dan a deep appreciation of the beauty of the land, the light of early mornings and the deep hues of summer sunsets. Dan Mieduch earned a B. Degree in Industrial Design from the University of Michigan in 1969 and then served in the U. Army Medical Corps for eighteen months as a command artist for the Southern Command in the Panama Canal Zone. Dan completed several historical paintings for area museums while in Panama. Following his military career, Dan worked for several commercial art studios in Detroit where he met his wife, Rhonda. It was during this time that Dan learned the disciple needed to succeed in the art business. In 1975 Dan decided to turn his attention to becoming a western fine art artist. He focused on what he perceived as a simpler time - the early 20th century American frontier. Dan and Rhonda felt that a move to Phoenix would better serve his artistic interests and the relocation to Arizona proved to be the start of a very successful career. Dan's work sells in the 4-5 figures for his originals. You can see his work and prices online. OVERALL SIZE OF FRAME is 26"x30" and OVERALL SIZE OF ORIGINAL PAINTING is 11"x17". The item "General George Custer Signed Letter Civil War-Army WithOriginal Painting PSA/DNA" is in sale since Monday, April 6, 2020. This item is in the category "Collectibles\Autographs\Military". The seller is "justdoit23" and is located in Irvine, California. This item can be shipped worldwide.