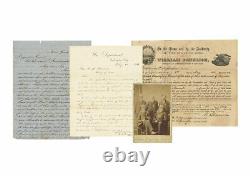 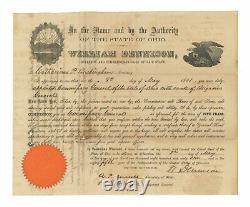 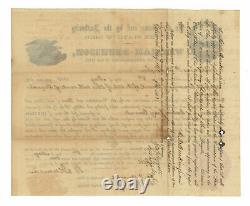 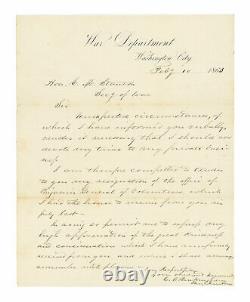 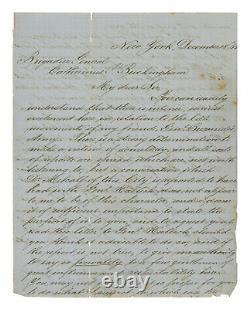 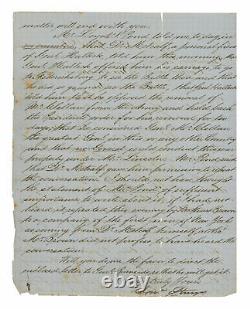 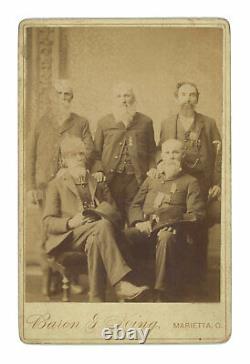 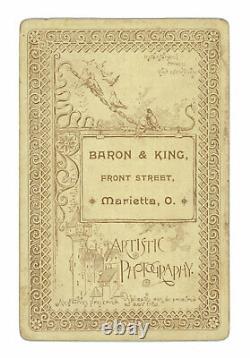 An outstanding collection of documents related to Brigadier General Catharinus P. Buckingham , assistant to Secretary of War Edwin M. Stanton , and best known as the officer who, on November 9, 1862, delivered the order to General George B.

McClellan relieving him of command. Buckingham's May 8, 1861 brigadier's commission as Commissary General for the State of Ohio, signed by Buckingham (on reverse), Governor William Dennison , and General Henry B. Very good condition, 11 1/2 x 9 1/2, minor toning throughout, creased where folded, Several small holes at folds. Buckinghams February 10, 1863 autograph signed letter of resignation to Secretary Stanton, citing a need to attend to personal business.

Halleck had opposed McClellan's removal and believed that no General could conduct this war properly under Mr. The "Metcalf" mentioned is likely Dr.

John Thomas Metcalfe, whose son Henry Metcalfe, served as aide de camp on Halleck's staff. The Doctor was attending physician at Bellevue Hospital and was a former army ordnance officer and, later, a professor of medicine at NYU. Delicate condition, 2 pages, 8 1/2 x 10 3/4, creased where folded, as well as some separation at folds. A postwar cabinet card featuring Buckingham and three other Union veterans. Buckingham was born and raised in the Putnam section of Zanesville, Ohio, the only child of Ebenezer and Catharine Putnam Buckingham. He was a grandson of Rufus Putnam of American Revolutionary War fame and his wife Persis Rice Putnam. He graduated from the United States Military Academy sixth in the Class of 1829, which also included future Confederate Generals Joseph E. He subsequently served as a second lieutenant in the 3rd U. Buckingham married Mary Gird on July 5, 1830, in Utica, New York. He was Assistant Professor of Natural and Experimental Philosophy at West Point from October 1830 to August 28, 1831. He resigned from the Army in 1831. From 1833 to 1836, he was a professor of mathematics and natural philosophy at Kenyon College.

Volunteers, and was assigned to special duty as assistant to the Secretary of War at the War Department in Washington, D. And served until he resigned on February 11, 1863. Transcript of Buckinghams letter of resignation to Secretary Stanton. Unexpected circumstances, of which I have informed you verbally, render it necessary that I should now devote my time to my private business. In doing so permit me to express my high appreciation of the great kindness and consideration which I have uniformly received from you, and which I shall always remember with pleasure. Transcript of Jonathan Sturges letter to Buckingham. New York, December 18'62. You can readily understand that there is intense earnest excitement here in relation to the late movements of my friend, Gen.

There is a strong determination to make a victim of something, and all sorts of reports are spread which are not worth listing to, but a conversation which Dr. Metcalf of this City is reported to have had with Genl Halleck does not appear to me to be of this character and I deem it of sufficient importance to state the purport of it to you and to request you to read this letter to Genl Halleck, should you think it advisable to do so, and if the report is not true, to give me authority to say so privately to a few gentlemen of great influence and respectability here. You may not feel that it is proper for you to do what I sujject in which case the matter will end with you. Pond told me today, in an omnibus, that Dr. Metcalf, a personal friend of Genl Halleck offered him his carriage to go to Fredericksburg to see the Battle there and that he did so go and see the Battle, that Genl Halleck told him that he opposed the removal of McClellan from the Army and held back the President's order for his removal for ten days, that he considered Genl McClellan the greatest Genl in this or any other Country and that no General could conduct this war properly under Mr.

Metcalf gave him permission to repeat the conversation. I should not have thought the statement of Mr.

Pond of sufficient importance to write about it, if I had not heard it repeated this evening by Mr. Stuart Brown to a company of the first men of New York as coming from Dr. Brown did not profess to have heard the conversation. Will you do me the favor to direct the enclosed letter to Genl Burnside so that he will get it. Following Antietam, it took six weeks of prodding from Washington before McClellan marched the Army of the Potomac south in pursuit of Lee. It took another thirteen days to cover forty-five miles. Lincoln had seen enough, but feared the political repercussions of sacking the popular general before the 1862 elections on November 4. Wasting no time, Lincoln issued an order to General Halleck on November 5: By direction of the President, it is ordered that Major General McClellan be relieved from the command of the Army of the Potomac; and that Major General Burnside take the command of that Army.

It seems certain, then, that Sturgess statement about Halleck holding Lincolns order for ten days was simply second-hand gossip. Whether Halleck actually said that no General could conduct this war properly under Mr. Lincoln should draw equal skepticism.

In his book Lincolns Lieutenants, author Stephen W. Sears described the scene that unfolded when McClellan received the order four days later on November 9. Secretary Stanton did not discount a coup detat on McClellans part, and he planned the change of command with care. He sent his adjutant, Brigadier General Catharinus P. Buckingham, to the army with strict orders.

He was to see Burnside first and employ the strongest arguments to induce him to accept the command. If he refused it, Buckingham was to return to Washington for new orders. Which then would involve Joe Hooker.

On Buckinghams arrival, Burnside spoke, as he had twice before, of his want of confidence in himself. Buckingham warned of consequences for disobeying an order, but it was the threat of his nemesis Hooker getting the command that brought him around.

With Burnside in tow, Buckingham went to McClellans tent and handed him Lincolns order relieving him. They shall not have that triumph.

To his successor he said with a smile, Well, Burnside, I turn the command over to you. There were but four days in between Lincoln issuing the order to Halleck and the order being delivered to General McClellan, not the ten days reported in the Jon Sturges letter. Given that election day was November 4, it seems unlikely that Halleck played a devious role as suggested in the letter.

Please see my other items for more interesting Civil War letters, documents, and images. The item "Document Archive of Union Civil War General Catharinus P. Buckingham of Ohio" is in sale since Thursday, March 7, 2019. This item is in the category "Collectibles\Militaria\Civil War (1861-65)\Original Period Items\Documents". The seller is "iron-horse-sales" and is located in Champaign, Illinois.