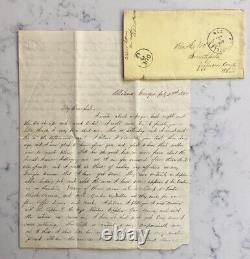 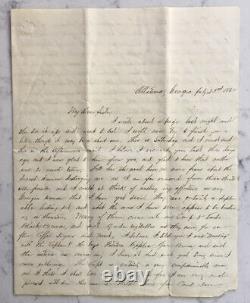 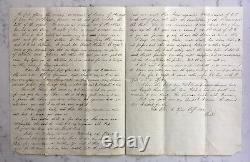 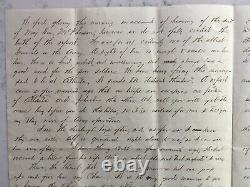 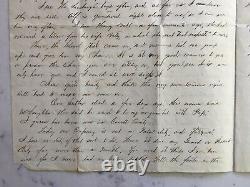 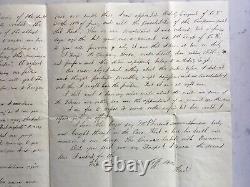 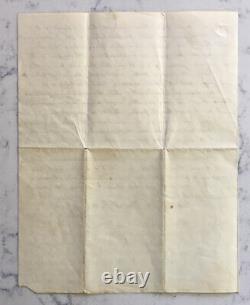 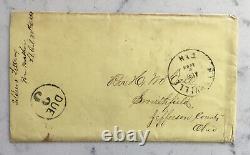 A SIGNED HANDWRITTEN LETTER BY SGT E. HUD MCCALL, 80TH OHIO VOLS. TO HIS SISTER DATED JULY 23RD, 1863 FROM ALLATOONA, GEORGIA. Glad to hear that Mother was so much better. They are certainly a deplorable looking set, and the ones I have seen appear to be bordering on starvation.

Many of them come into our Camp to trade Black Berries, and such Garden Vegetables as they have, for our flour, Coffee, Sugar and Meat. I believe I told you I was'Messing' with the Captain! He buys potatoes, Green Beans, and such other extras as come in... We feel gloomy this morning on account of hearing of the death of Maj.

General McPherson, however we do not fully credit the report. He was certainly one of the ablest Generals in the Army. A sight of him is enough to make one love him.

He is so kind, modest, and unassuming, and always has a good word for the poor soldier. We hear heavy firing this morning- said to be at Atlanta.

Is sounds like'distant thunder. A report came a few moments ago that our troops are occupying one portion of Atlanta and Johnston's the other... Today our Company is out on patrol duty...

I was appointed Orderly Sergeant of Co. "C" on the 16th of June, and until the Consolidation of Companies hold that rank. When we were Consolidated I Was reduced, but a few days ago the Col. Gave me a warrant as 1st Sergt. One reason why I said nothing about the matter before, thought perhaps something might happen (such as Consolidation) and then I might lose the position.

I didn't wish to have any wise made about the matter as some of the Veterans are rather sore about the appointment of a recruit over their heads... I hear the boys say McPherson's body was brought through on the Cars. What a lose his death will occasion to our Arms. The Cars were loaded with Prisoners...

The seller is "preservedpast" and is located in Kansas City, Missouri. This item can be shipped worldwide.