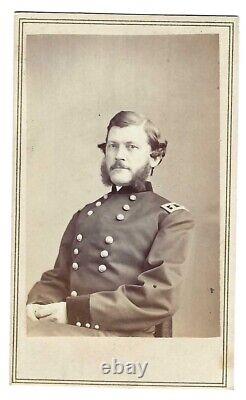 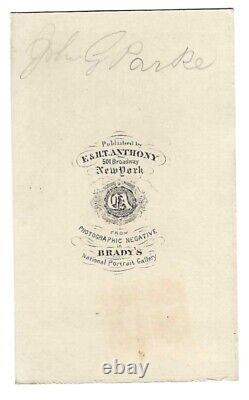 Burnside, often serving him as chief of staff in major engagements such as Antietam, Fredericksburg and the Overland Campaign. Parke also held significant field commands during Burnside's North Carolina Expedition, Vicksburg and the battle of Fort Stedman as well as brief stints in command of the Army of the Potomac. Parke was born in Coatesville, Chester County, Pennsylvania, to Francis G.

He graduated from the United States Military Academy in 1849 and was commissioned a brevet second lieutenant in the Corps of Topographical Engineers. At the start of the Civil War, Parke was appointed brigadier general of volunteers and commanded a brigade in the operations on the North Carolina coast in early 1862. He received a brevet promotion for the Battle of Fort Macon and was promoted to major general of volunteers on July 18, 1862.

In the Army of the Potomac, Parke served briefly as commander of 3rd Division, IX Corps. Then he served as chief of staff to Maj. Ambrose Burnside during the battles of Antietam and Fredericksburg.

He assumed command of the IX Corps and was sent to the Western Theater for the Vicksburg Campaign. Parke then was Burnside's chief of staff in the Army of the Ohio in the defense of Knoxville. Parke served as chief of staff to Burnside during the Overland Campaign, in which the latter commanded IX Corps, as well as in the beginning stages of the Siege of Petersburg. After the Battle of the Crater, Burnside was relieved of command and Parke assumed command of the IX Corps. He led it at the Battle of Globe Tavern, the Battle of Peebles' Farm, and the Battle of Boydton Plank Road.

In 1865, while Army of the Potomac commander Maj. He led the IX Corps through the fall of Petersburg and the Appomattox Campaign.

In 1865 he was appointed brevet major general in the regular army in recognition of his service at Fort Stedman. After the Confederate surrender, Parke commanded IX Corps in the Department of Washington. He also briefly commanded XXII Corps. Parke was mustered out of the volunteer service on January 15, 1866. He served as an engineer, being promoted to the rank of lieutenant colonel on March 4, 1879.

Parke attained the rank of colonel on March 17, 1884. He served as superintendent of the United States Military Academy from August 28, 1887, to June 24, 1889, and he retired from the Army on July 2 of that year. Parke wrote several reports on public improvements and exploration of the west. He also served as a cartographer, publishing maps of the New Mexico Territory and California. Parke died in Washington, D.

Leaving a wife, Ellen, but no children. He is buried in the churchyard of Church of St.

Laws of the United States relating to the improvement of rivers and harbors: from August 11, 1790 to March 3, 1887, with a tabulated statement of appropriations and allotments, Washington: G. Information with regard to the present condition of the work marking the boundary, pursuant to the first article of the treaty between the United States and Great Britain of June 15, 1846, Washington, D. Emory Report of explorations for that portion of a railway route near the 32d parallel of latitude, lying between Dona Ana, on the Rio Grande, and Pimas Villages, on the Gila, 1855, Washington, D. Corps of Topographical Engineers, 1859.