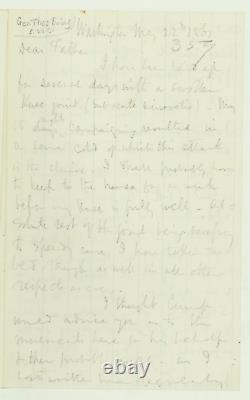 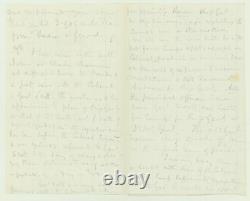 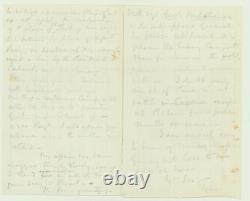 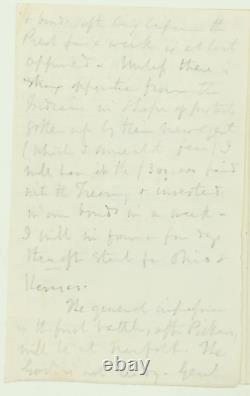 I thought Cump would advise you as to the movements here. Scott is in bad humor with the administration for appointing Reeder Brig Gen. In regular army We have the idea he will not favor Cumps appt, except as Colonel. Ewing informs his father of political machinations in Washington and early Civil War plans and appointments.

He painstakingly weighs the chances of his foster brother (and brother-in-law), William T. Sherman, obtaining a generals commission. He also offers a sober analysis of the relative strengths of the Union and Confederate armies in the Eastern theater. The general impression is the first battle, after Pickens, will be at Norfolk.

Impatience is the only opposing General he fears. At present, it is plain the enemy can put man for man in the field anywhere in eastern Virginia with us.

Autograph Letter Signed, to Thomas Ewing, his father. I have been laid up for several days with a swollen knee joint (sub acute sinovetis) My 15 nights campaigning resulted in a severe cold of which this attack is the climax. I shall probably have to keep to the house for a week before my knee is fully well absolute rest of the joint being necessary to speedy cure. I have taken to bed, though as well in all other respects as ever. I thought Cump would advise you as to the movements here in his behalf & their probable result.

As I have written him requesting. And supposed you were there until I got a letter from there a few days ago. I have been, either with John or Charles Thomson, at different times, the President & pretty near all the Cabinet & Gen. The question as to his appointment to place of Brig Gen.

(both of equal grade) in the regular army has been before the Cabinet twice & was yesterday refused to Gen. Scott & the Secy of War, & will be by them determined very soon probably in a day or two. Scott is in very bad humor with the Administration. For appointing Reeder Brig Gen.

In regular army: & for neglecting to consult him in other matters. We all have the idea that he will not favor Cumps appt. Except as Colonel, for which he has him down on his roll of proposed recommendations: & that he wants Anderson for Brig Gen. All the principal officers here, save Gen. Scott, are heartily for Cump for Brig Gen.

However always speaks of him in the highest terms of praise. To so high a place as Brig Gen. His declination of the place of chief clerk of War Dept to be billowed by plea of apt Secy, so handsomely & so warmly urged on him by the President & Cabinet, hurt his standing Blair spoke of it in Cabinet with considerable feeling.

One thing is certain Cump will either be Brig or Q. Or be Colonel of a 2200 Reg.

I will advise you at once when the matter is settled. My affair has been dragging through, slowly, being to stand examination in all its shapes from Secy & Prest.

I doubt very much if there is a battle in Virginia except at Pickens for a full month or more. Sherman was called Cump by his birth parents Charles and Mary Sherman from a very young age.

His father, a justice on the Ohio Supreme Court, named him William Tecumseh, an unusual name for the time, after the great Shawnee war chief of the early 19. Unfortunately, his father carried exorbitant debts, and after he died penniless in 1829, when Cump was only nine years old, his mother couldnt hold the family of eleven children together. Family and friends helped by adopting one or two children apiece, and Sherman was taken in by neighbor Thomas Ewing. With the Ewings he was well-educated, and his foster father secured him his appointment to West Point. All of his brothers and foster brothers were very ambitious, including Thomas Ewing, Jr. At the time of Ewing, Jr.

S letter, Sherman was an executive for St. Louis Rail Road, a streetcar company. On May 8, Sherman wrote directly to Secretary of War Simon Cameron offering his services. Ewings realistic prediction proved correct Sherman was commissioned colonel of the 13. Infantry Regiment backdated to May 14, 1861.

According to historians Brooks Simpson and Jean Berlin, on May 6, Tom urged Cump to tell his army friends what position he wanted and they would work with Winfield Scott to get it for him. On May 8 he reported that he, along with John and Charles Sherman, had seen Lincoln, who expressed a high opinion of WTS and promised to second any recommended appointment.

He added that WTS had better offer his services soon or all opportunities would be gone. Sherman would not receive a brigadier generals commission until after First Manassas (July 21, 1861), but it was made effective from May 17, giving him seniority over such officers as Ulysses S. His rapid rise was in part due to his standing as one of the few Union officers to perform well at First Manassas, a humiliating defeat. And Sherman himself were uncommonly skeptical of the chances for easy victory over the South. Both were confident that the moral and economic superiority of the North would reap victory in the end, however.

In an oft-quoted letter to Southern friend David Boyd in 1861, Sherman predicted, This country will be drenched in blood, and God only knows how it will end. It is all folly, madness, a crime against civilization! You people speak so lightly of war; you dont know what you're talking about. War is a terrible thing! You mistake, too, the people of the North.

They are a peaceable people but an earnest people, and they will fight, too. They are not going to let this country be destroyed without a mighty effort to save it Besides, where are your men and appliances of war to contend against them? The North can make a steam engine, locomotive, or railway car; hardly a yard of cloth or pair of shoes can you make.

You are rushing into war with one of the most powerful, ingeniously mechanical, and determined people on Earthright at your doors. You are bound to fail. Correctly ascertained the naiveté of the On to Richmond crowd, and, conversely, the wisdom of General Winfield Scott, hero of the Mexican War, who was General-in-Chief at the outset of the Civil War.

Scotts Anaconda Plan provided the ultimate blueprint for Union victory, with its call for naval blockade and conquest of the Mississippi Valley. It would be Grant and Sherman who did more than any other Union officers to execute Scotts realistic vision for achieving victory. He moved to Kansas in the late 1850s, and became chief justice of the state in 1861 upon its entrance to the Union. Then joined the army and was promoted to brigadier general in March 1863. He commanded the District of the Border, comprising parts of Kansas and western Missouri.

Ewing was responsible for General Order Number 11, issued in retaliation against William Quantrills raid on Lawrence, Kansas. By this, all civilians with Confederate sympathies in the counties in question could be expelled. In late September and October 1864, Ewing helped stymie Sterling Prices invasion of Missouri. Senator from Ohio, Secretary of the Treasury under William H. Harrison, and Secretary of the Interior under Zachary Taylor. His daughter Ellen married his foster-son, William T. Sherman, and three of his sons Thomas, Jr. Hugh, and Charles became Union generals. After a brief bout of depression in late 1861, Sherman was reassigned to the West and served under Ulysses Grant in the Army of the Tennessee. He took part in such important victories as Shiloh, Vicksburg, and Chattanooga, and in March 1864, with Grants ascension to General-in-Chief, was named to command the entire Western Department. His capture of Atlanta in September 1864, helped stem the increasing unpopularity of the war on the homefront, helping Lincoln win reelection, and his March to the Sea from November 16 to December 22, 1864, ravaged the Georgia countryside and devastated the South. Sherman remained in the Army and, when Grant was elected President in 1868, became commanding general, which position he retained until his retirement in 1884. He prosecuted the wars against the Plains Indians. Historic Documents and Legacy Collections. For over 20 years, Seth Kaller has been one of the countrys largest buyers of important historic documents and artifacts. More than 10,000 rare manuscripts, documents, maps, and books handled by Kaller are now in institutional and private collections including working drafts of the United States Constitution, Lincoln-signed copies of the 13th Amendment and Emancipation Proclamation, and rare prints and broadsides of the Declaration of Independence. Kaller is a member of the Antiquarian Booksellers Association of America (ABAA), the Professional Autograph Dealers Association (PADA), the American Antiquarian Society, the Manuscript Society, the New-York Historical Societys Chairmans Council, and the Papers of Abraham Lincoln Advisory Board. Everything we sell comes with our absolute guarantee that it is original and authentic. Whether youre interested in the Founding Fathers, Documents of Freedom, Battles and Leaders, the Civil War, African-Americana, World History, Science, or a particular hero or villain, we can help you explore opportunities to take ownership of history. We can coordinate every aspect of the process for you, from searching for individual items to building entire world-class collections for your home, business, foundation, or favorite museum. Build a legacy by preserving history for generations to come.

Through donations and loans to your favorite museum, library, or university, you ensure the survival of these important documents and act as a steward for personalities and ideas that shaped the world. The item "Civil War Letter re Chances of William T.

Sherman Obtaining General Commission" is in sale since Tuesday, January 29, 2019. This item is in the category "Collectibles\Militaria\Civil War (1861-65)\Original Period Items\Other Civil War Original Items". The seller is "sethkaller" and is located in White Plains, New York. This item can be shipped to United States.