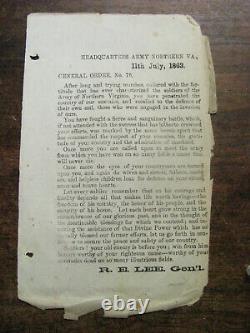 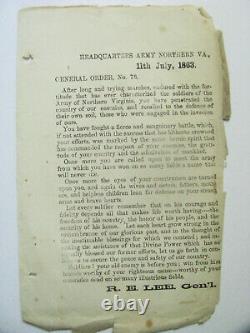 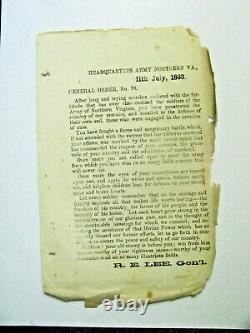 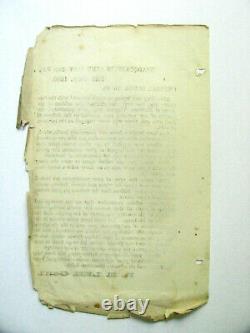 After the Battle of Gettysburg the Confederate Army with their backs to the flooded Potomac River between Hagerstown and Williamsburg, Maryland was prepared for battle with Meade's Army of the Potomac, where they remained until the 14th of July. An original Civil War Confederate field printed General Order No. " at "Headquarters Army Northern Va. After long and trying marches, endured with the fortitude that has ever characterized the soldiers of the Army of Northern Virginia, you have penetrated the country of our enemies, and recalled to the defence of their own soil, those who were engaged in the invasion of ours.

You have fought a fierce and sanguinary battle, which, if not attended with the success that has hitherto crowned your efforts ", has commanded the respect of your enemies, the gratitude of your country and the admiration of mankind". Lee's order now calls them to again meet them, Once more the eyes of your countrymen are tuned upon you, and again do the wives and sisters, fathers, mothers and helpless children lean for defense on your strong army and brave hearts etc.

Your old enemy is before you; win form him honors worthy of your righteous cause ---worthy of your comrades dead on so many illustrious fields" 1p 8 x 5" ptd with large logo. Age stains, edge tears, 2 punch holes in left margin, Overall VG. This has been in my collection since 1983, and I have only heard of one other being offered since.

Another of this order is also located in the Virginia Museum at Richmond. (Reference George Wise, "Campaigns and Battles of the Army of Northern Virginia"). This particular order was likely printed at lee's HQ in the field, by Confederate Army enlisted men on a printing press transported on an army wagon on July 11 or 12 as Lee prepared his men for battle. General & Special Orders were issued to communicate commands and information to the Army. Each order, issued in writing by a command, was then printed for distribution to each unit, either at an army department headquarter or by commanders at local headquarters in the field on portable printing presses operated by soldiers. The orders were then issued to regiments, to be read aloud to the troops. General Orders were printed as issued with date & location; at the end of a year the regimental adjutant might retain them loose or simply string bind them by punching holes or cut slits in the left margin and stringing on ¼ red cloth string tape (the source of the old expression "government red tape"). Usually, American Military Orders of the 19.

Century including Civil War era were printed on an 8 x 5 sheet of quality rag paper. General Orders and other imprints. All items are unconditionally guaranteed to be authentic and in the condition as described. NOTE: Any repair to a paper item is listed.

I use only museum curator approved archival repair tape. PLEASE READ DETAILS OF THE ITEM DESCRIPTION. I TRY TO DESCRIBE ALL ITEMS ACCURATELY.

The item "CIVIL WAR GETTYSBURG CAMPAIGN GENERAL ROBERT E LEE FIELD ORDER 11TH JULY, 1863" is in sale since Tuesday, November 2, 2021. This item is in the category "Collectibles\Militaria\Civil War (1861-65)\Original Period Items\Documents". The seller is "99counties" and is located in Angier, North Carolina. This item can be shipped to United States.