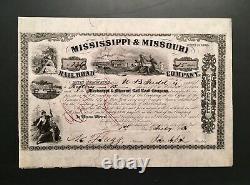 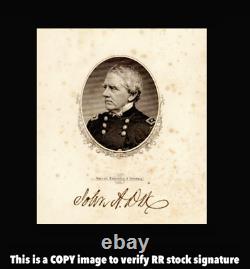 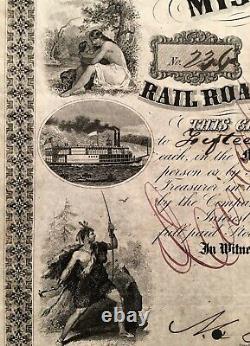 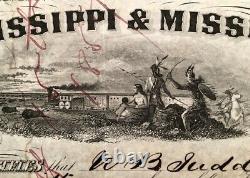 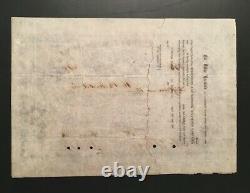 Personally signed railroad certificate by John A. Dix in 1857, a future Civil War Major General. He was also Secretary of the Treasury, US Minister to France, a Senator and Governor of New York. At the outbreak of the Civil War, President James Buchanan's Secretary of the Treasury , John A. Dix, telegraphed a famous order to the American cutter Robert McClelland in the port of New Orleans on Jan.

29, 1861, less than three months before the start of the American Civil War. His telegram ordering Treasury agents in New Orleans stated - "If anyone attempts to haul down the American flag, shoot him on the spot". We need more Americans like him today.

The photos of this exceptional stock certificate ultimately describe the condition of this early wild west RR stock from 1857. The vignettes are of the time period in the American west where this RR was operating. The paper is crisp, NO tears, minor hard to see folds, perfect for framing. It measures 7.25" x 10.25".

You can screen print, crop and print that if you want and include it in the frame with the stock certificate. If you don't have the ability to do that, I can send it with your certificate, let me know. This historical stock certificate is signed by A.

Flagg as Treasurer and John A. The Mississippi and Missouri Railroad is important because of its owner, Thomas C. Durant, one of the men responsible for the U.

Durant founded the Mississippi and Missouri in 1853. The railroad was corporately linked to the Rock Island Railroad, which built the first railroad bridge across the Mississippi River in April of 1856. However, construction was slow under Durant's ownership, and the line ultimately terminated in Kellogg, Iowa, 40 miles east of Des Moines, Iowa in 1865, or only halfway across the state.

The item "Civil War General John A. Dix Signature on 1857 Stock, Mississippi & Missouri RR" is in sale since Sunday, January 5, 2020. This item is in the category "Collectibles\Militaria\Civil War (1861-65)\Original Period Items\Documents". The seller is "preclovisman" and is located in Columbia, Pennsylvania.