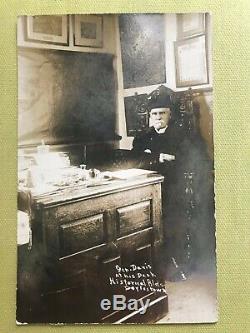 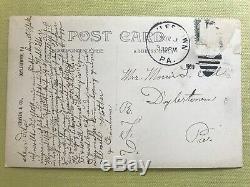 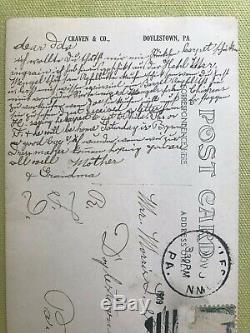 From a small collection of RPPC's from a family (the Fells) who lived in Doylestown, PA during the. Turn of the century who. Used postcards with incredible images of their local area. This truly one of a kind, 1909 RPPC of William Watts Hart Davis, a. Brigadier General of the United States Volunteers. During the American Civil War was posted one year before his death in 1910.

This features a probably unique portrait of Davis and 1909 interior view of the'Historical Building' in Doylestown. How many Civil War Generals lived long enough to be featured on RPPC's? CDV's were common before the turn of the century of course, but since Gen. Davis lived to the ripe old age of 90 years, this is a rather unique combination.

In addition to his lengthy service in the Mexican-American and Civil Wars, Davis was a Harvard Law grad who went on to found the Bucks County Historical Society and become a pillar of the community as a government official and author. I do not expect that any other copies of this particular card will ever come up for sale, because I doubt any other copies survived. I do hope a Bucks County or Doylestown PA collector gets the chance to own this unique card (the historical society's or post card books don't have anything like this). I could potentially arrange to deliver it in person to Doylestown if desired at no additional cost. William Watts Hart Davis (July 27, 1820 December 26, 1910) was a brevetted. During the American Civil War.

The rank was awarded to him on March 13, 1865, for gallant and meritorious services, during operations against Charleston, South Carolina. Outside of his military service, he worked as a journalist, author and government official.

He was born in Bucks County, Pennsylvania, in 1820, to Major General John Davis and Amy (Hart) Davis. He was first educated at a private school run by Anna Longstreth and later attended a school at the Southampton Baptist Church. In 1832, he was enrolled in the Doylestown Academy.

He finished his elementary education at a boarding school in Burlington, New Jersey. In 1841, he began studying at Partridge's University and Military School in Norwich, Vermont, graduating in 1842.

After graduating he was hired as a maths teacher and commandant of cadets in the military academy at Portsmouth, Virginia, where he worked for three years. In 1846, while studying law at Harvard.

He volunteered for service in the MexicanAmerican War. Enlisting as a private in the First Massachusetts Infantry.

He was commissioned first lieutenant of Captain Crowningshield's Company on December 1, 1846. He was mustered out on July 24, 1848, when the war ended.

Davis later served in the Civil War, raising his own regiment, the 104th Pennsylvania Regiment, after being given the authority to do so on August 21, 1861. Davis, an avid historian, founded the Bucks County Historical Society.

The seller is "jonathanrafalik" and is located in Prince Frederick, Maryland. This item can be shipped to United States.