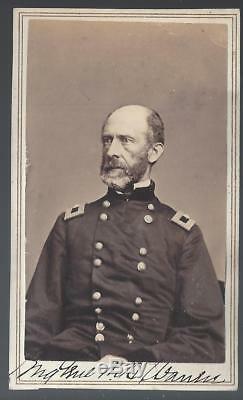 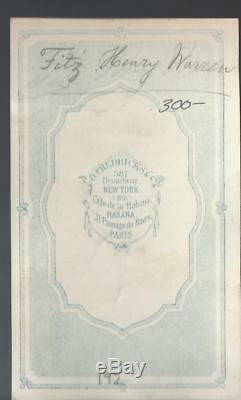 Fitz Henry Warren (January 11, 1816 June 1878) was a politician and a Union Army general during the American Civil War. Warren was born in Brimfield, Massachusetts.

[1] In August 1844, he moved to Burlington in the Iowa Territory where he was a journalist and editorial contributor for the Burlington Hawkeye. [1] He was an early political activist in the Whig Party.

He was reported to have been the first to propose the nomination of General Zachary Taylor for President. He was a delegate to the National Whig Convention in 1848.

Upon the subsequent inauguration of President Taylor in 1849, Fitz Henry Warren was appointed First Assistant Postmaster General. [1] After the death of Taylor, Warren resigned his position in protest of President Millard Fillmore's support of the Fugitive Slave Law.

With the growing support of Anti-Slavery Whigs, Fitz Henry Warren was made secretary of the Whig Party National Executive Committee. Warren was chairman of the Des Moines County delegation to the convention of 1856 that organized the Republican Party and nominated John C. Frémont as the first Republican presidential candidate.

In 1861 he was one of the chief editorial writers on the New York Tribune and the author of the controversial "On to Richmond" articles after the First Battle of Bull Run. On July 18, 1862, President Abraham Lincoln appointed Warren to the grade of brigadier general of volunteers, to rank from July 16, 1862, [2] with a command in the army in Missouri under Major General Samuel R.

In 1863 General Warren was the leading candidate before the Republican State Convention for Governor of Iowa, but by a combination of the supporters of other candidates, Warren was defeated. On February 21, 1866, President Andrew Johnson nominated Warren for appointment to the grade of brevet major general of volunteers, to rank from August 24, 1865, and the United States Senate confirmed the appointment on April 26, 1866. [3] Warren was mustered out of the volunteers on August 24, 1865. Ivil War Union Brigadier General. Prior to the Civil War, he served as the First Assistant Postmaster General and was one of the most brilliant political editorial writers.

In 1861, he raised the 1st Iowa Cavalry, was appointed Colonel and was promoted Brigadier General in 1862, with a command in the army under General Samuel R. For the remainer of the war, he commanded the Missouri State Militia and was brevetted Major General of US Volunteers in March 1865. In 1866, he was elected to the Iowa State Senate and was appointed Minister to Guatemala by the President Andrew Johnson in 1869. "Guaranteed period item from the Civil War" "Guaranteed Civil War image from the 1860's". The item "Civil War Era CDV Union General Fitz Henry Warren of Iowa" is in sale since Thursday, January 11, 2018. This item is in the category "Collectibles\Militaria\Civil War (1861-65)\Original Period Items\Photographs". The seller is "civil_war_photos" and is located in Midland, Michigan. This item can be shipped worldwide.