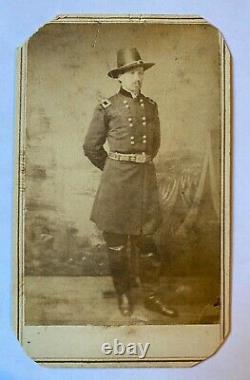 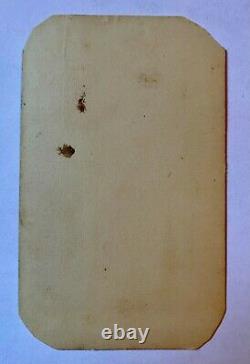 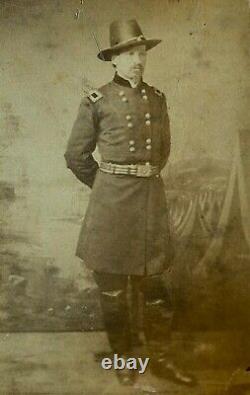 Although the CDV does not have a backmark, it is believed to have been taken by photographers Brooks and Blauvelt at Port Hudson. The backdrop is their signature, and it was only used by them and only at Port Hudson. Charles Adam Heckman was born on December 3, 1822, in Easton, Northampton County, Pennsylvania. Heckman, who was baptized on January 21, 1823, was the eighth of eleven children born to Johannes Heckman and Mary Schneider. Heckman graduated from Eastons Minerva Seminary. During the Mexican-American War, Heckman served with the 1st U.

Voltigeurs from 1846 to 1848, attaining the rank of Sergeant before being mustered out. After returning to Pennsylvania, Heckman began working as a conductor for the Central Railroad of New Jersey. On June 30,1849, Charles Adam Heckman, aged 26, married Elizabeth Craig, aged 20. The couple had one child, a son, Frank Bernard Heckman, born on October 7, 1849.

Census lists Heckman and his family as residing in Easton, and the 1855 Census lists them as living in Phillipsburg, Warren County, New Jersey. After the outbreak of the Civil War, on April 20, 1861, Heckman enlisted and was commissioned as Captain of Company D of the 1st Pennsylvania Infantry Regiment.

When General Ambrose Burnside departed for Virginia, he left the Union forces in North Carolina under the command of John G. In the Winter of 1862, Foster led an expedition against the Wilmington and Weldon Railroad at Goldsboro, Wayne County, North Carolina. Brigadier General Heckman led a brigade in Fosters expedition at Kinston, White Hall, and Goldsboros battles. For a large portion of1863, Heckman was in command of the District of Beaufort, briefly commanding the Union defenses at New Bern.

By the end of 1863, he was sent to Virginia to command the Union garrison at Newport News, Virginia, and was temporarily in command of Norfolk and Portsmouths defenses. On April 28, 1864, Brigadier General Heckman was assigned the command of the 1st Brigade, 2nd Division, XVIII Corps in the Army of the James. Heckman was wounded again at the Battle of Port Walthall Junction, and on May 15, 1864, he was captured and taken prisoner at the Battle of Proctors Creek after his brigade had repelled a superior force of Confederates five times. Heckman was first imprisoned at Libby Prison in Richmond, Virginia, and afterward taken to Macon, Georgia, and Charleston, South Carolina. Heckman led his division at the Battle of Chaffins Farm in support of General George J.

Stannards main attack against Fort Harrison. When Heckman moved forward, his troops veered off far to the North.

Instead of coming directly to the aid of Stannards division, Heckmans men launched a costly attack against Confederate trenches near Forts Gilmer and Johnson. During the fighting in Fort Harrison, XVIII Corps commander Edward O. Ord was severely wounded and carried from the field. Heckman then assumed command of the XVIII Corps. With this change in command occurring at a crucial time, the fighting ground to a halt and the Union forces constructed a defensive line.

After an undistinguished show of leadership on September 29, 1864, Major General Benjamin F. Butler decided to replace Heckman in command of the corps with his chief of staff, Godfrey Weitzel. Returning to command his division, Heckman helped repulse the Confederate attack the following day. In December 1864, Heckman was transferred to the 3rd Division of the XXV Corps, and during the months of January and February 1865, Heckman was in command of the XXV Corps.

A short while later, on May 25, 1865, Brigadier General Heckman resigned from the Union Army. And once again worked for the New Jersey Central Railroad as a conductor and railroad dispatcher.

In 1887, Heckman was listed as a member of Phillipsburgs Board of Education. In 1888, Heckman and his wife relocated to the Germantown neighborhood of Northwest Philadelphia to live with their son.

Charles Adam Heckman died on January 14, 1896, at the age of 73 in Germantown after an illness of several weeks. His obituary, printed in The Allentown Leader, read as follows: ABRAVE OLD SOLDIER: A Veteran of Two Wars Is at Last Called to the Bivouac of the Dead. Brigadier General Charles Adam Heckman, of the Ninth New Jersey Veteran Volunteers, died yesterday at his home in Germantown. He had been a sufferer from wounds ever since the war, but his death was due to Brights disease, and his final illness lasted about eight weeks.

He was born in Easton in 1822. In the Mexican war, he served as sergeant of the United States Voltigeurs, and he entered the civil war as a captain in the First Pennsylvania Regiment. He received his commission as brigadier general of New Jersey Volunteers in 1862.

He served in Burnsides expedition to North Carolina, and afterward in the Army of the James. He commanded the defenses of Norfolk and Portsmouth, Va.

In the winter of 1863-64, and at Deweys Bluff, Va. He was captured and sent to Libby Prison, and afterward to Macon, Ga. Where he was one of the 51 men who were placed under fire of the federal guns. He was exchanged and commanded the 18th corps at the capture of Fort Harrison. During the past eight years, General Heckman lived in Germantown with his son Frank B.

His wife is still living. The burial will take place at Easton. Heckman was buried in Easton Cemetery (Section D, Lot 197), with his wife being buried alongside him after her death in 1901. Additionally, his son Frank was buried beside his parents after his death in 1909.

Please refer to the images in this listing for details regarding the condition of the item. Offers on any items will be considered so long as they are reasonable. If you have any questions or concerns regarding and item or an order, please contact me.

The item "Civil War Era CDV of Brig. Heckman 9th New Jersey Infantry" is in sale since Friday, November 27, 2020. This item is in the category "Collectibles\Militaria\Civil War (1861-65)\Original Period Items\Photographs". The seller is "history-major" and is located in Grand Junction, Colorado. This item can be shipped to United States.