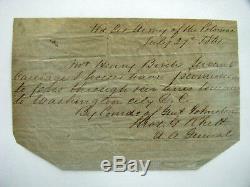 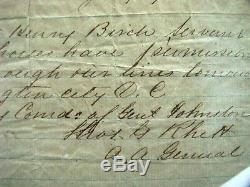 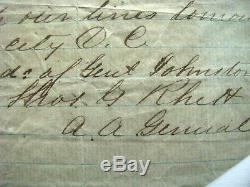 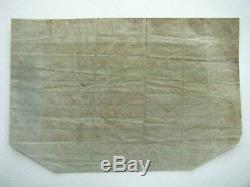 At the Battle of Bull Run The Confederate Army was called the Army of the Potomac. An original CSA Pass issued at HQ Army of the Potomac July 27, 1861 (issued just 6 days after the Battle) allowing Henry Birch & Servant to pass through the lines to Washington, DC, by Command of General Johnston, and ink signed by Thomas G Rhett as AA General. Major Thomas Grimke Rhett was a West Point Graduate from South Carolina, a notable US Mounted Rifles frontier officer prewar, and at the time of signing was on the staff of General Joseph Johnston at Camp Pickens, near Manassas, Virginia.

The 1p 7 x 5 inked pass on gray lined paper has archival repairs and age stains, is Overall Good. General Orders and other imprints. All items are unconditionally guaranteed to be authentic and in the condition as described. PLEASE READ DETAILS OF THE ITEM DESCRIPTION.

I TRY TO DESCRIBE ALL ITEMS ACCURATELY. The item "CIVIL WAR CONFEDERATE PASS GENERAL JOHNSTON 1861 VIRGINIA" is in sale since Sunday, June 17, 2018.

This item is in the category "Collectibles\Militaria\Civil War (1861-65)\Original Period Items\Other Civil War Original Items". The seller is "99counties" and is located in Winterville, North Carolina. This item can be shipped to United States.