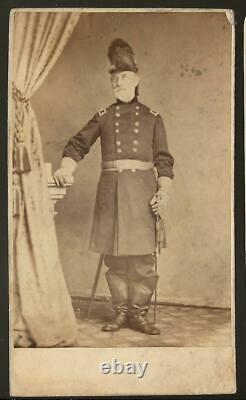 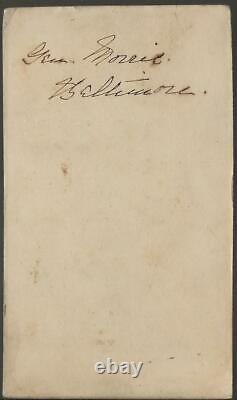 (August 31, 1801 December 11, 1865) was an American soldier and a career officer in the United States Army. He served as a colonel and brevet brigadier general in the Regular Army (United States), with Union Army service during the American Civil War (18611865). Morris served as a brigade commander primarily in charge of the defense of Fort McHenry and Baltimore Harbor.

He had several brief periods in command of VIII Corps and of the Middle Department, which almost completely overlapped with each other. Morris was born in 1801 at Ballston Springs, New York. [2] Morris was the second son of Sarah (née Carpenter) Morris and Lt. (17601832), who served as aide-de-camp to Gen. [3] Among his siblings was Lewis Morris (who married Julia Hayes), Gouverneur Morris (who married Anna Maria de Camp), James Morris, Frances Morris (who married David Brooks), Anne Morris who married Aquila G. Stout, and Arthur Breese Morris (who married Mary Bard). His paternal grandparents were Lewis Morris, a signer of the United States Declaration of Independence, and Mary (née Walton) Morris, herself a granddaughter of prominent merchant William Walton. [5] Among his large extended family was paternal uncle Richard Valentine Morris, aunt Helena Magdalena Morris wife of U. He was appointed as a cadet in the United States Military Academy at West Point, New York on March 17, 1815 at age fourteen. [6] Morris graduated last out of 30 cadets in the class of 1820. After graduation, Morris was promoted to second lieutenant, 6th United States Infantry Regiment, July 1, 1820. He initially served on the frontier in Iowa. Promoted to first lieutenant in 1823, Morris commanded the artillery in the Arickaree Expedition.

Morris served in various garrison positions until 1836, when he was promoted to captain, 4th Artillery. He fought in the Second Seminole War, including the Battle of Wahoo Swamp, receiving a brevet major appointment for gallant conduct. During the MexicanAmerican War, Morris served as Major of the Artillery Battalion of the "Army of Occupation" and fought at the Battle of Palo Alto and Battle of Resaca de la Palma. Returning to the United States in 1848, Morris was promoted to major, 4th Artillery and served in various garrison and frontier positions.

[1] On May 14, 1861, Morris was promoted to lieutenant colonel of the 4th Artillery Regiment in the Regular United States Army, followed by a promotion to colonel of the 2nd U. Artillery Regiment on November 1, 1861. [1] On April 30, 1862, President Abraham Lincoln nominated Morris for appointment to the grade of brevet brigadier general, Regular United States Army, for "meritorious services", to rank from June 9, 1862 and the United States Senate confirmed the appointment on June 9, 1862. Morris served as a brigade commander primarily in charge of the defense of Baltimore Harbor from July 22, 1862, and served both in the Middle Department and its military organization, the VIII Corps, under Maj.

Porter in the 8th New York Regiment, and later in the Marine Corps. Arthur Morris (18431892), who married Adelaide Bettner. Anne Ritchie Morris (18451910), who married Col. Joseph Gales Ramsay (18431899), a son of Gen. Morris died on December 11, 1865 at Fort McHenry in Baltimore, Maryland at age 64. [1] He was buried at St. Ann's Episcopal Church graveyard in the Bronx. On April 16, 1866, President Andrew Johnson nominated Morris for posthumous appointment as a brevet major general, for "Faithful and meritorious Services during the Rebellion", in the Regular United States Army to rank from December 10, 1865 and the United States Senate confirmed the appointment on May 4, 1866. The item "Civil War CDV Union General William Walton Morris" is in sale since Sunday, June 7, 2020. This item is in the category "Collectibles\Militaria\Civil War (1861-65)\Original Period Items\Photographs". The seller is "civil_war_photos" and is located in Midland, Michigan.