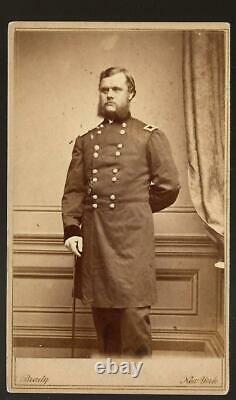 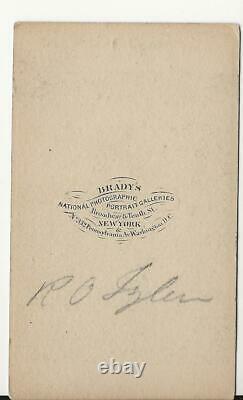 Robert Ogden Tyler (December 31, 1831 December 1, 1874) was an American soldier who served as a general in the Union Army during the American Civil War. He was commander of the Artillery Reserve of the Army of the Potomac at the Battle of Gettysburg in July 1863, where his artillery batteries played an important role in the Union victory. Tyler also led a division of heavy artillery turned infantry during the Overland Campaign of 1864.

Tyler was born in Hunter, New York, to Frederick and Sophia (née Sharp) Tyler. He moved with his family to Hartford, Connecticut when he was 7 years old. [1] He was a nephew of Daniel Tyler, who also served as a general in the Civil War. He received an appointment to the United States Military Academy in West Point, New York, and graduated 22nd of 52 cadets in the Class of 1853. He received a brevet appointment as a second lieutenant and was assigned to the artillery.

In the Spring of 1854, he served under Colonel Edward Steptoe and was stationed at the Presidio in San Francisco, California. [1] In 1855, he was stationed at Fort Vancouver and Fort Dalles where he fought in the Yakima War. He was promoted to First Lieutenant on September 1, 1855.

Tyler served as an artilleryman in the Utah Territory during the Mormon disputes and was among the U. Army officers who signed a petition supporting the reappointment of the controversial Mormon leader Brigham Young as governor. In 1858, he fought in the Coeur d'Alene War in the Battle of Four Lakes and the Battle of Spokane Plains.

In 1859, he served under Thomas W. Sherman at Fort Ridgely in Minnesota.

General Tyler and Artillery Reserve staff in Culpeper, Virginia. During the April 1861 crisis at Fort Sumter in Charleston, South Carolina, Tyler was part of a hastily assembled relief force that tried unsuccessfully to reinforce the beleaguered garrison. [5] He was promoted to captain on May 17, 1861 and ordered to Alexandria, Virginia to set up supply depots for the Union forces in Virginia and Washington, D. On September 17, 1861 he was appointed colonel of the 4th Connecticut Infantry. [6] Tyler began training the men as artillerymen, and the regiment was renamed the 1st Connecticut Heavy Artillery on January 2, 1862.

The regiment served in the Peninsula Campaign, and Tyler commanded the siege train of the Army of the Potomac under Maj. He received commendations for his participation in the Battle of Hanover Court House, the Battle of Gaines' Mill and the Battle of Malvern Hill. [7] On November 29, 1862, Tyler was promoted to brigadier general of volunteers and under General Ambrose Burnside was assigned command of all the artillery in the "Center Grand Division" of the army. He was the second officer in the artillery to hold that position, the other being Henry Jackson Hunt.

[5] His guns participated in the Battle of Fredericksburg, providing artillery support for the series of assaults on Confederate positions on the heights near Fredericksburg. Joseph Hooker assumed command of the Army of the Potomac and reorganized it, creating a formal Artillery Reserve under Tyler's command. The reserve was expanded to five brigades and 118 guns. [5] Tyler commanded the reserve during the battles of Chancellorsville and Gettysburg, where many of his guns were used to help repel Confederate attacks on Union positions such as Cemetery Ridge and Cemetery Hill, as well as during Pickett's Charge on July 3. During the battle, he had two horses shot from under him.

[8] Tyler was disabled by sun stroke during part of the Gettysburg campaign. [9] In the Fall of 1863, Tyler also participated in the Bristoe and Mine Run campaigns, but played no major role. In early 1864, Tyler was assigned command of a division of infantry consisting entirely of heavy artillery regiments, which he led at Harris Farm in the Battle of Spotsylvania Court House, where it was attached to II Corps.

He then led a brigade in 2nd Division, II Corps, at the Battle of Cold Harbor and was severely wounded by a bullet in his ankle[10] which incapacitated him from any further field duty during the war. After a 6 month recovery, Tyler served in an administrative role in command of the District of Delaware and the Eastern Shore with his headquarters in Philadelphia. Robert Ogden Tyler memorial in Cedar Hill Cemetery.

At the close of the war, the War Department rewarded scores of officers with brevet promotions dating from March 1865. Tyler received the brevet rank of major general of volunteers for "great gallantry at the Battle of Cold Harbor".

In 1866 he mustered out of volunteer service and was commissioned as a lieutenant colonel in the regular army, serving as deputy Quartermaster General in several locations. His wartime injuries contributed to his declining health, and Tyler died in Boston, Massachusetts, at the age of 42.

He is buried in Cedar Hill Cemetery in Hartford. [2] Before he died, he was able to complete his autobiography, the Memoir of Brevet Major-General Robert Ogden Tyler Philadelphia: J.

Tyler Post #50 of the Grand Army of the Republic in Hartford was named in his honor. The item "Civil War CDV Union General Robert O Tyler Artillery Army of the Potomac" is in sale since Monday, December 28, 2020. This item is in the category "Collectibles\Militaria\Civil War (1861-65)\Original Period Items\Photographs". The seller is "civil_war_photos" and is located in Midland, Michigan.