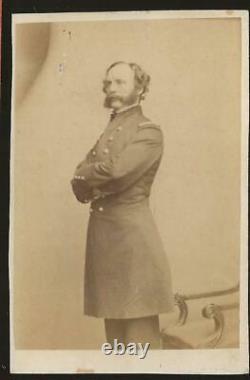 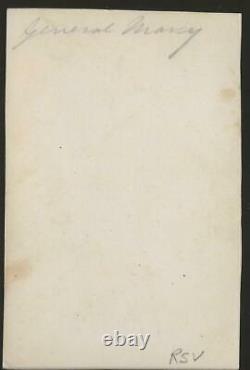 Randolph Barnes Marcy (April 9, 1812 November 22, 1887) was an officer in the United States Army, chiefly noted for his frontier guidebook, the Prairie Traveler (1859), based on his own extensive experience of pioneering in the west. This publication became a key handbook for the thousands of Americans wanting to cross the continent. In the Civil War, Marcy became chief of staff to his son-in-law George B. McClellan, and was later appointed Inspector General of the U.

Marcy was born at Greenwich, Massachusetts, and graduated from the United States Military Academy at West Point in 1832 as a lieutenant in the 5th U. He married soon afterwards, and one of his children, Ellen Mary, would later marry future General-in-Chief George B.

Marcy first saw combat while serving in the Black Hawk War in Illinois and Wisconsin. He was promoted Captain in the Mexican War, and fought at Palo Alto and Resaca de la Palma. He was then assigned to duty in Texas and Oklahoma, where he escorted emigrants, located military posts, explored the wilderness, and mapped routes. In 1852 he was in charge of the expedition that first reached the headwaters of both forks of the Red River.

It was on this expedition that he met McClellan. In 1857, Marcy accompanied Brigadier General Albert Sidney Johnston on the expedition against the Mormons in Utah. Here he distinguished himself on a forced march through the Rockies in midwinter, when he led his troops to safety after they had run out of provisions for two weeks. Meanwhile, his achievements and well-written military reports had attracted attention in Washington, and he was recalled to work for the Department of State.

Here he prepared his acclaimed guidebook to the western trails, The Prairie Traveler: A Handbook for Overland Expeditions, with Maps, Illustrations, and Itineraries of the Principal Routes between the Mississippi and the Pacific. Government in 1859, the Prairie Traveler quickly became an indispensable guide for the thousands of Americans wanting to reach California, Oregon, Utah, and other destinations.

Based on his own extensive experience as a pioneer, the book provided authoritative advice about reconnaissance, fieldcraft, provisions and healthcare, that would save many lives on these perilous routes. It covered key topics like hunting and tracking, and food and water supply, as well as specialist advice about the selection of horses, the avoiding of quicksands, the interpreting of smoke signals and sign language, and numerous other issues. After completing this work, Marcy was promoted to the rank of major and posted to the Pacific Northwest, where he was assigned as paymaster. By the end of the war, he was Inspector-General of the U.

Marcy was brevetted major general of volunteers in 1868 (back-dated to 1865) and became a brigadier general of the U. He continued his service until he retired in 1881. The item "Civil War CDV Union General Randolph Marcy" is in sale since Wednesday, March 18, 2020. This item is in the category "Collectibles\Militaria\Civil War (1861-65)\Original Period Items\Photographs". The seller is "civil_war_photos" and is located in Midland, Michigan.