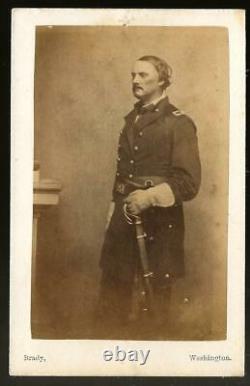 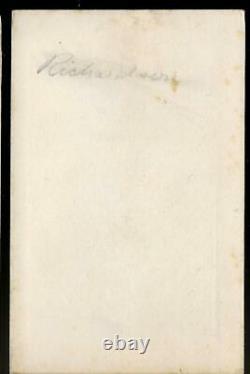 Israel Bush Richardson (December 26, 1815 November 3, 1862) was a United States Army officer during the MexicanAmerican War and American Civil War, where he was a major general in the Union Army. Nicknamed "Fighting Dick" for his prowess on the battlefield, he was mortally wounded at the Battle of Antietam near Sharpsburg, Maryland. Richardson was born in Fairfax, Vermont. He was reportedly a descendant of famed American Revolutionary War general Israel Putnam.

[1] He was appointed from Vermont to the United States Military Academy in West Point, New York. He graduated 38th out of 52 cadets in the Class of 1841. He was one of 23 classmates who would become generals during the Civil War. After some routine assignments, Richardson served as a second lieutenant in the Second Seminole War in Florida.

He was promoted to first lieutenant on Sep 21, 1846. He received two brevets for meritorious service during the MexicanAmerican War, to captain and major for the actions at Contreras, Churubusco, and Chapultepec.

He enlisted in the Union Army and recruited and organized the 2nd Michigan Infantry. He married Fannie Travor on May 18, 1861, in Wayne County, Michigan. When he reported with his regiment in Washington, DC, General Winfield Scott greeted him with "I'm glad to have my'Fighting Dick' with me again". [4] Richardson, promoted to colonel on May 25, 1861, was assigned command of the 4th Brigade, 1st Division, in the newly organized army of Brigadier General Irvin McDowell. His brigade saw limited action at the First Battle of Bull Run near Blackburn's Ford, and in covering the subsequent federal withdrawal to Washington. He was promoted to brigadier general, ranking from May 17, 1861. He commanded several brigades in the Army of the Potomac and then the 1st Division of the II Corps during the Peninsula Campaign in mid-1862. He was involved in the fighting at the battles of Yorktown, Seven Pines, and the Seven Days. He was particularly distinguished in sharp fighting near the Chickahominy River. Richardson was promoted to major general after the Seven Days Battles.

His division was stationed in Washington, DC, during the Second Battle of Bull Run and did not participate in that engagement. Richardson's 1st Division played a key role during the Battle of Antietam on September 17, 1862, attacking Confederate positions in the center of the Sunken Road in support of the 3rd Division of Maj. Richardson pushed forward beyond the road and was directing the fire of his artillery and organizing another attack when he was struck by a shell fragment. Carried to the rear, Richardson was treated at a field hospital. His wound was not considered life-threatening, and he was given a room in Major General George B.

McClellan's headquarters, the Pry House. President Abraham Lincoln paid his respects to the wounded Richardson during a visit to the battlefield in October. However, infection set in, and then pneumonia, which claimed the life of the popular general in early November. He was among six generals to be killed or mortally wounded at Antietam. His body was escorted to Detroit. Large crowds lined the streets during his funeral procession to nearby Pontiac, where he was buried in Oak Hill Cemetery. Fort Richardson, a Texas frontier fort active from 1867 to 1878, was named for him. Richardson Camp #2 of the Sons of Union Veterans of the Civil War in Oakland, Michigan, was also named for the fallen general. Battery Richardson, a 12-inch coast artillery gun battery at Fort Hancock, New Jersey, was named for him. List of American Civil War generals (Union). A moniker shared by Confederate Major General Richard H. Anderson whom Richardson would meet at Antietam in the Civil War[3]. Antietam on the Web; Wilson & Fiske 1900, p. Wilson, James Grant; Fiske, John, eds. Appletons' Cyclopædia of American Biography. That time'Fighting Dick' fought'Fightin' Dick' at Antietam at WeAreTheMighty. Stanford, California: Stanford University Press, 2001.