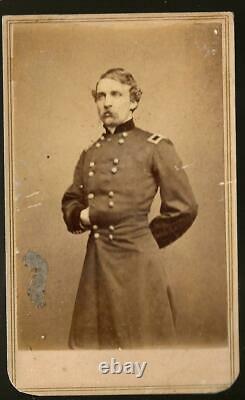 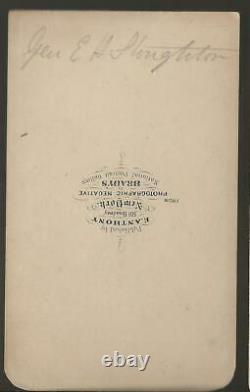 Edwin Henry Stoughton (June 23, 1838 December 25, 1868), was appointed a brigadier general in the Union Army during the American Civil War but his appointment expired after it was not confirmed by the U. Four days later, on March 8, 1863, he was captured by Confederate partisan ranger John S. Mosby while asleep at his headquarters in the Virginia village of Fairfax Court House. The incident became well known and Stoughton became an object of ridicule as a result. Stoughton was born in Chester, Vermont, the son of Henry Evander and Laura (Clark) Stoughton.

Stoughton was appointed a cadet at the U. Military Academy on July 1, 1854, and graduated with the class of 1859. He served garrison duty as a brevet second lieutenant in the 4th U.

Infantry from July to September 1859. He was promoted to second lieutenant, and transferred to the 6th U. Stoughton during the civil war.

Stoughton resigned his regular commission in March 1861, and in September was appointed commander of the 4th Vermont Infantry with the rank of colonel. He was only 23 at the time of his appointment, and said to be the youngest colonel in the army. [4] He led his command in the Peninsula Campaign, and his effective performance led to his selection for promotion and command of a brigade. In November 1862, he was appointed brigadier general of Volunteers, and he assumed command of the 2nd Vermont Brigade on December 7, replacing Colonel Asa P.

Stoughton's brother, Charles B. Stoughton, assumed command of the 4th Vermont Infantry in his stead.

Stoughton's appointment was never confirmed by the U. Senate and it expired March 4, 1863, less than a week before Mosby's Fairfax Court House Raid. Mosby's Rangers led by Confederate officer John S. Mosby led a daring raid into Union Territory and captured Stoughton at Fairfax Court House on March 9, 1863. Stoughton had hosted a party for his visiting mother and sister, who were staying at the home of Confederate spy Antonia Ford.

After leaving the party, Stoughton retired to a nearby house that served as his headquarters. Mosby allegedly found Stoughton in bed, supposedly rousing him with a slap to his rear. " Mosby quickly replied, "Do you know Mosby, general? Have you got the rascal? " "No but he has got you! " In his own written account of Stoughton's capture, 1888's Battles and Leaders of the Civil War, Mosby did not mention the supposed "spanking incident. Allegedly, Stoughton was not popular with the officers and men of the brigade, and few mourned his loss. [6] Colonel Blunt assumed command of the brigade again, turning it over to the new commander, Brigadier General George J. Stannard, on April 20, who led the brigade until the Battle of Gettysburg. After a two-month stay in Richmond's Libby Prison, Stoughton was exchanged, but saw no further service. Senate had not confirmed his initial appointment and he was not re-appointed. He resigned from the Union Army in May 1863 and moved to New York. Stoughton as depicted in 1911's Prison Life in the Old Capitol and Reminiscences of the Civil War. Stoughton was an attorney in New York City after the war, practicing with his father and with his uncle, Edwin W. He died of tuberculosis in Dorchester, Massachusetts on December 25, 1868. He is buried in Immanuel Cemetery, Rockingham, Vermont. The Grand Army of the Republic post in Bellows Falls, Vermont was named for him. The item "Civil War CDV Union General Edwin Stoughton Vermont Captured by Mosby" is in sale since Saturday, June 20, 2020. This item is in the category "Collectibles\Militaria\Civil War (1861-65)\Original Period Items\Photographs".