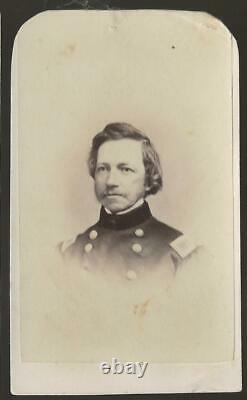 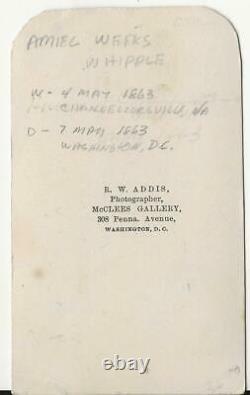 Amiel Weeks Whipple (October 21, 1817 May 7, 1863)[1] was an American military officer and topographical engineer. He served as a brigadier general in the American Civil War, where he was mortally wounded at the Battle of Chancellorsville.

Among his many survey assignments for the US War Department, he participated in the difficult survey of the new United States and Mexico boundary and led the survey of a possible transcontinental railroad route along the thirty-fifth parallel from Arkansas to Los Angeles. Whipple was born to David and Abigail Brown (Pepper) Whipple in Greenwich, Massachusetts. He grew up in Concord, Massachusetts where his father owned an inn.

He was teaching school at Concord in 1834 when he applied to the United States Military Academy at West Point. After he was turned down by the Academy, he attended Amherst College until 1837 when he was finally accepted to West Point. Whipple graduated fifth in the class of 1841. His early career included surveying the Patapsco River, sounding and mapping the approaches to New Orleans, and surveying Portsmouth Harbor.

From 1844 to 1849 he was assigned to a survey of the northeastern boundary of the United States, serving under James Duncan Graham. In 1848 Whipple was assigned to the United States Boundary Commission, tasked with surveying the new boundary between the US and Mexico resulting from the MexicanAmerican War. For a time, he served as the interim chief surveyor for the commission until William H. Emory was named to the position. Heading east from San Diego, the survey parties traveled through some of the most rugged and remote terrain in the country. Compounding the difficulty was the extreme desert heat and hostile Apache Indians. Whipple accomplished his assigned surveys in spite of these challenges and was promoted to first lieutenant on April 24, 1851. [1] By 1853 his survey work was complete and his reports had been written.

In 1853 Congress authorized the Pacific Railroad Surveys to select the best route for a transcontinental railroad. Whipple was directed to lead one of those surveys along the 35th parallel from Fort Smith, Arkansas to Los Angeles.

The Whipple expedition left Fort Smith on July 15, 1853 with a group of seventy men including soldiers, teamsters, and scientists. Among the scientists were John Milton Bigelow, a medical doctor and botanist; Jules Marcou, a Swiss geologist; and Balduin Möllhausen, a German artist and a protege of Alexander von Humboldt. Whipple's party made good progress through Indian Territory (now Oklahoma), the Texas panhandle and the New Mexico Territory, reaching Albuquerque on October 5.

[1][4] After Albuquerque, they were joined by frontiersman Antoine Leroux who helped to guide the surveyors through the most difficult part of the journey to California. They reached California on February 7 after a near-disastrous crossing of the Colorado River then crossed the Mojave Desert and reached Los Angeles on March 20, 1854. The findings of the Whipple expedition along with the other transcontinental survey parties were published by the government in a massive twelve-volume report, the Pacific Railroad Reports. In addition to reports on topography, geology, botany and zoology, Whipple wrote a lengthy essay on the southwestern Indian tribes that the expedition had encountered. Whipple was promoted to captain in 1855 and then assigned to supervise efforts to open the Great Lakes to navigation by larger vessels, deepening channels through the St.

Clair flats and the St. He was also commander of the lighthouse districts from Lake Superior to the Saint Lawrence River. At the outbreak of the Civil War, Whipple served for a time under General Irvin McDowell as commander of the nascent balloon reconnaissance unit. [6] He made a balloon ascent over the Confederate lines at Bull Run. [5] He then became chief topographical engineer under General George B.

McClellan in the Army of the Potomac. His maps were used on many Virginia battlefields. In 1862, as brigadier general of volunteers, he led the defense of Washington, D. In September 1862 Whipple was assigned to the Third Army Corps, and on December 1315 participated in the Battle of Fredericksburg. Whipple was severely wounded by a sharpshooter at Chancellorsville on May 4, 1863, received last rites on the battlefield and was taken to Washington.

Just before Whipple's death on May 7 President Lincoln, a friend of Whipple's, promoted him to major general of volunteers. Lincoln rode in an open carriage as part of Whipple's funeral cortege. He was later awarded posthumously more brevets for his wartime services, and both of his sons received presidential appointments to the military academy of their choice. [1][2] He was buried in the Proprietors' Cemetery, Portsmouth, New Hampshire. Whipple was memorialized with the naming of two forts, Fort Whipple, Arizona Territory and Fort Whipple, Arlington County, Virginia (now Fort Myer).

Numerous plants taxa were named in his honor, including the genus Whipplea and species Hesperoyucca whipplei, and Sclerocactus whipplei. The standard author abbreviation Whipple is used to indicate this person as the author when citing a botanical name. The item "Civil War CDV Union General Amiel Whipple KIA Chancellorsville" is in sale since Saturday, May 2, 2020. This item is in the category "Collectibles\Militaria\Civil War (1861-65)\Original Period Items\Photographs". The seller is "civil_war_photos" and is located in Midland, Michigan.