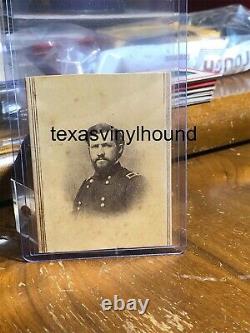 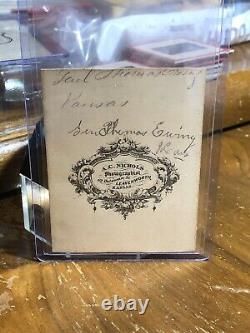 Size 3 1/4x 2.5. Is perhaps most remembered for issuing and enforcing General Order No. 11 during the Civil War. But Ewings legacy far exceeds this one event. Ewing was a vital player in engineering the entry of Kansas into the Union as a free state, served as the first Justice of the Kansas Supreme Court, defended Dr. Samuel Mudd against conspiracy charges in the Lincoln assassination, and was a member of Congress from Ohio as well as a self-trained military leader during the Civil War. Ewing was born on August 7, 1829, in Lancaster, Ohio into a highly influential, political family. His father, Thomas Ewing Sr. Was Secretary of the Treasury under President William Henry Harrison, Secretary of the Interior under President Zachary Taylor and a U. Along with his brothers, cousins, and his foster-brother, William Tecumseh Sherman, Ewing was educated at the private Lancaster Academy which was founded by the Ewing and Sherman families. From 18491850, Ewing served as private secretary to President Zachary Taylor and after Taylors death, enrolled but did not receive degrees from Brown University and the Cincinnati Law School. While waiting for the right opportunities to enter politics he traveled and met Ellen Cox whom he married on January 8, 1856. An exciting and non-traditional opportunity to enter national politics presented itself when Kansas became a territory and statehood seemed on the horizon.

He hoped to establish himself in Kansas and thereby gain appointment to represent Kansas in the U. With this goal in mind, he and Ellen moved to Leavenworth, Kansas, in 1856, where he worked to earn his fortune as a lawyer and land speculator while developing his political base. Ewing was antislavery in his beliefs and gravitated toward the Free-State Party. In 1858 he was a delegate to the Leavenworth Convention and was instrumental in having the Wyandotte (free state) Constitution adopted as the one under which Kansas entered the Union.

He was not appointed senator, but he was chosen to be the first chief justice of the Kansas Supreme Court and was sworn in on February 9, 1861. When the Civil War broke out, Ewing helped organize the 11th Kansas Infantry. When he was appointed colonel over the unit, he resigned as chief justice. In September 1862, the 11th Infantry became part of the District of Missouri.

In June 1863, Ewing was made commander of the District of the Border, which included those parts of Kansas and Missouri north of the 38th parallel. The guerrilla warfare that dominated the border region reached its apex with Quantrills raid on Lawrence, Kansas, in August 1863. Determined to eliminate the incessant cross-border raids, Ewing issued General Order No. 11 requiring all persons living in Bates, Cass, Jackson, and upper Vernon Counties in Missouri to leave the area by September 9, 1863.

The evacuation order forced 20,000 Missourians out of their homes. George Caleb Bingham, a famous Missouri painter and state politician, immortalized the evacuation in two identical paintings titled Martial Law or Order No. 11 remains controversial, contemporary Union supporters believed that it was necessary to bring some measure of peace to the District. Nonetheless, Ewings political support was weakened both among the armys leaders and in Washington. The item "Civil War CDV Photo Union General Thomas Ewing Jr. Nichols Studio Leavenworth KS" is in sale since Sunday, April 11, 2021.