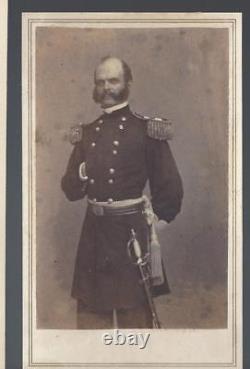 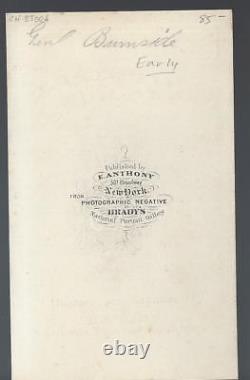 Anthony/Brady view of Brigadier General Ambrose Burnside of Rhode Island. At the outbreak of the Civil War, Burnside organized the 1st Rhode Island Infantry, which was one of the first units to arrive in Washington and offer the capitol protection. At the battle of First Manassas, Burnside commanded a brigade of infantry, and was appointed a brigadier general of volunteers on August 6, 1861 for his actions. In September of 1861, Burnside was given command of three brigades known as the North Carolina Expeditionary Force, and launched an attack against the North Carolina coast.

His force was successful in achieving a foothold in North Carolina, resulting in Burnside's promotion to major general of volunteers on March 18, 1862. At the battle of Antietam, Union General George B. McClellan gave Burnside command of the IX Corps as well as the I Corps.

During the battle, however, while in charge of the X Corps, Burnside's overly precise orders caused confusion and delays, which led to great difficulties in capturing what became known as Burnside's Bridge. After McClellan's failure to follow General Robert E. Lee following the battle of Antietam, Burnside was made commander of the Army of the Potomac on November 10, 1862.

Burnside decided to attempt a rapid approach to Richmond, leading to a very costly Union defeat on December 13 at the Battle of Fredericksburg, during which the Union army received 13,000 casualties after making numerous assaults against impregnable Confederate positions. This Union debacle, combined with a second failed attempt which became known as the "Mud March, " caused Burnside to be relieved of command, and Joseph Hooker was given command of the Army of the Potomac. In March of 1863, Burnside was given command of the Department of the Ohio. During his command, he arrested ex-Congressman Clement L. Vallandigham for making seditious comments, an act which drew Burnside some criticism. In autumn of 1863, Burnside successfully commanded his troops against Confederate General James L.

Burnside was able to outmaneuver Longstreet, and successfully held on to the city of Knoxville until Union reinforcements under William T. Sherman arrived and forced Longstreet to retreat.

After his successful defense of Knoxville, Burnside was ordered to take command of the XI Corps in support of the Army of the Potomac. He participated in much of the Overland Campaign under the direction of General Ulysses S. Grant, including the battles of the Wilderness, Spotsylvania Court House, North Anna, and Cold Harbor.

During the siege of Petersburg, Burnside commanded troops in the battle of the Crater, during which a Union mine dug under Confederate positions was filled with explosives and detonated, creating a fifty yard gap in the Confederate lines. Burnside failed to exploit the gap in time, which resulted in the loss of Union soldiers. After this failure, Burnside resigned his commission on April 15, 1865. After the war, Burnside briefly served as Senator from the state of Rhode Island.

The distinctive facial hair he wore throughout most of his life led to the identification of that form of facial hair by the modern name, sideburns, created from his last name. "Guaranteed period item from the Civil War" "Guaranteed Civil War image from the 1860's". This item is in the category "Collectibles\Militaria\Civil War (1861-65)\Original Period Items\Photographs". The seller is "civil_war_photos" and is located in this country: US. This item can be shipped worldwide.