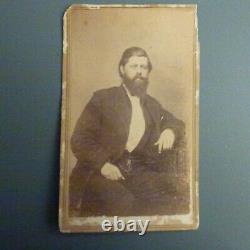 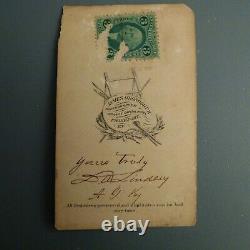 Original Antique CDV signed / autographed by Daniel Weisiger Lindsey taken sometime during his tenure as A. At the commencement of the Civil War D. Lindsey was a captain in the Kentucky State Guard, but ascertaining, during an encampment of the regiment to which he was attached in Alexander's Woods in May, 1861, that the State Guard was not to be used in aid of the government, he promptly marched his company from the camp and to its armory in Frankfort, and resigned his commission. As soon as General Nelson opened " Camp Dick Robinson" Lindsey went there and assisted in organizing Federal troops from Kentucky. About September 1, 1861, he was commissioned as chief of staff to General Thomas L.

Buckner having gone to the Southern Confederacy, had become the inspector-general of Kentucky. In October, 1861, Lindsey was commissioned by the Military Board of Kentucky to raise a regiment, which he at once proceeded to do, and soon recruited and organized the Twenty-second Kentucky Volunteer Infantry, which was mustered into the service December 12, 1861, with D.

Monroe, lieutenant-colonel, and Wesley Cook, major. The regiment was immediately ordered to service in the field, and with his command Colonel Lindsey participated in the campaigns under General Garfield in the Big Sandy Valley, and under General G.

Morgan in the capture of and around Cumberland Gap; from there up the Kanawha; from there to Memphis, Tennessee, where he was placed permanently in the command of a brigade, and with it participated in the campaigns and battles thereof under Generals Sherman, McClellan, and Grant against Arkansas Post, Vicksburg, and Jackson, Mississippi; and thence under General Ord, commanding the corps, the Thirteenth was transferred to the Gulf Department, where, his health having become impaired by continuous service in the field, and being required by medical advice to transfer to a more northern climate, he, on October 14, 1863, resigned his command to accept the position of inspector-general of Kentucky, to which he was commissioned October 31, 1863. In the summer of 1864 he was commissioned adjutant-general of Kentucky, and held the position until the fall of 1867. Typically the Adjutant General is Chief of Staff to the Governor and commanding general of the organized militia.

He directs the planning and employment of the military forces of the State in carrying out their State mission, establishes unified command of State forces whenever jointly engaged, coordinates the military affairs with the Civil Defense of the State and organizes and coordinates the activities of all civil agencies including local and State police in event of declaration of limited emergency by the Governor. He is responsible for the organization, administration, training, and supply of the organized militia and maintains an accurate account of all State and U. Property issued to the State. He supervises the expenditures of monies allocated for the maintenance of the different military activities within the State and maintains a bureau of records of the service of state troops in the Wars of the United States. The Adjutant General is appointed by the Governor.

The item "Civil War CDV Daniel Weisiger Lindsey Adjutant-General of Kentucky" is in sale since Wednesday, March 20, 2019. This item is in the category "Collectibles\Militaria\Civil War (1861-65)\Original Period Items\Photographs". The seller is "scfcd" and is located in West Palm Beach, Florida. This item can be shipped to United States.