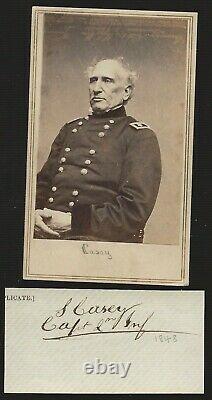 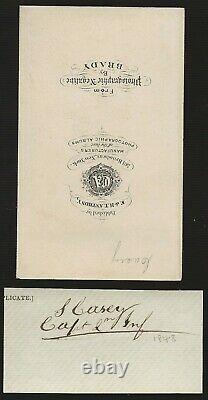 Civil War Union Major General. Born in East Greenwich, Rhode Island, he began his military graduating from West Point in 1826, as Lieutenant in the 2nd US Infantry. He served in the Seminole War and was decorated for gallantry in the Mexican War. At the start of the Civil War, he was a member of an officer's board and wrote the revised tactics manual for the Infantry. His new published manual was used by thousands of volunteer officers in the Union Army and even influenced Confederate tactics. Promoted Brigadier General, he served in only one field action during the Peninsula Campaign. In May 1862, he was promoted Major General, spending the rest of the war as an administrator and commanded a provisional brigade in the defenses of Washington, D.

After the war, he served with the 4th US Infantry until he retired from the Regular Army in 1868. The item "Civil War CDV & Autograph General Silas Casey" is in sale since Sunday, July 7, 2019. This item is in the category "Collectibles\Militaria\Civil War (1861-65)\Original Period Items\Photographs".