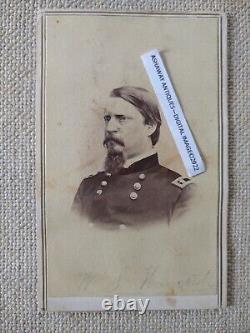 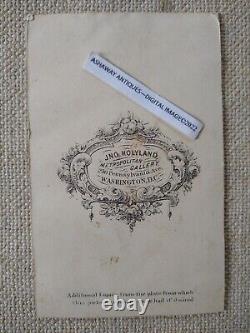 Carte-de-visite photograph of Major-General Winfield Scott Hancock, by John W. The bust portrait view shows a man with a mustache and goatee posing for his likeness in a photographic studio dressed in the uniform of a Union Army major general. An 1844 graduate of the U. Military Academy, Hancock saw service in the Mexican War and remained with the U. He was stationed in southern California when the Civil War broke out.

Returning to the East, he quickly rose to the rank of brigadier general and commanded the 2. Army Corps by the time of the Battle of Gettysburg, where he became something of a hero for his military prowess and bravery. Badly wounded, Hancock recovered sufficiently over the winter to return to the Army of the Potomac in the spring of 1864.

He gave up his field command in November but continued his service in administrative roles. This included overseeing the execution of the Lincoln Conspirators in Washington, D. I suspect this photograph dates to about that time, though it could be as early as 1864. The photographer was John W.

His mother, Harriet, was working as a photographer with her 22 year old son, according to his Find-A-Grave page. I did a thorough search of the internet and found no reference to this portrait of Hancock by Holyland-not even a copy of the image by a different photographer or publisher. The carte-de-visite is in good condition with light wear and soiling. The bottom edge has been trimmed down by about 1/16.

Note also the rubbing and bumping at the corners of the card, as well as the minor waviness (but not creasing). The photograph exhibits good or better tonal range and shows good or better detail.

A rare image of Winfield Scott Hancock! This item is in the category "Collectibles\Militaria\Civil War (1861-65)\Original Period Items\Photographs". The seller is "deadmanspocket" and is located in this country: US. This item can be shipped to United States, Canada, Mexico, Bermuda.