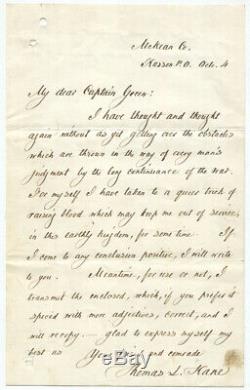 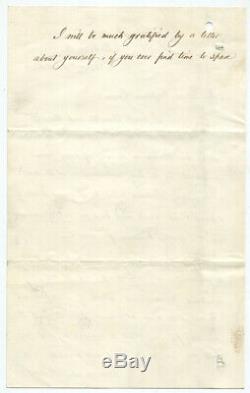 Civil War General Thomas Kane penned and signed this somewhat gloomy letter to Captain Green in which he writes about getting over the obstacles which are thrown in the way of every mans judgement by the long continuance of the war. He goes on ominously: For myself I have taken to a queer trick of raising blood which may keep me out of service, in this earthly kingdom, for some time. Though the letter is not dated with a year, one can assume Kane wrote this letter while he was suffering from the pneumonia that he contracted when he and his horse fell in the Rapidan River in April, 1863.

Despite his illness, when he heard of Robert E. Lees second invasion of the North, Kane rallied himself and his men to carry intelligence to George Gordon Meade at Gettysburg. A brief post-script on the verso reads: I will be much gratified by a letter about yourself, if you ever find time to spare.

He was influential in aiding the Mormons' settlement in Utah, and became a close friend to Brigham Young and an advocate for Utah statehood in the process. He served with the 13th Pennsylvania Reserve Regiment, also known as the Pennsylvania Bucktails, and the 12th Corps of the Army of the Potomac during the US Civil War, and was brevetted as a Major General for valor at Gettysburg. John Pugh Green, born in 1839, was also a lawyer and then served as Captain and Assistant Adjutant General under General Kane with the Bucktails. In 1865, he began a career with the railroads, eventually retiring as a vice-president of the Pennsylvania Railroad.

Letter measures approximately 8 x 5. Condition: Fold lines, two file puncture holes at the upper left corner not affecting any text and one at the bottom just touching a letter, a well-defined fingerprint at the lower right in brown ink certainly has the possibility of being Kane's.

Generally in very good condition and an excellent example of General Kanes neat script. A note about packing: Check our feedback. We take pride in our excellent packing.

We double-box all fragile items to insure their safe journey through the postal system. We do not mark merchandise values below value or mark items as "gifts" - US and International government regulations prohibit such behavior.

1863 Civil War General Thomas Kane Autograph Letter Signed" is in sale since Friday, May 3, 2019. This item is in the category "Collectibles\Autographs\Historical". The seller is "dholz" and is located in Cohoes, New York. This item can be shipped worldwide.