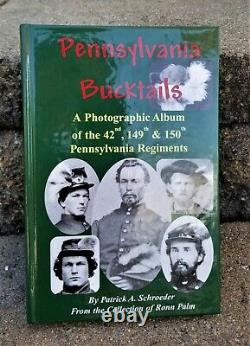 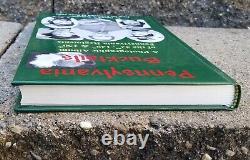 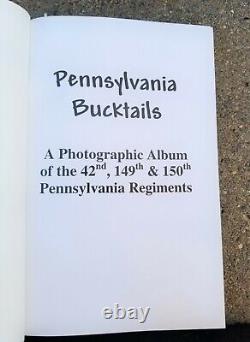 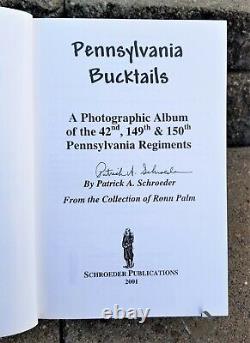 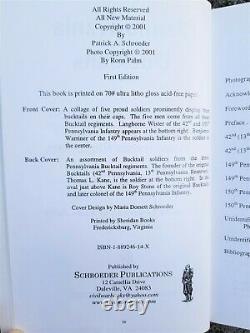 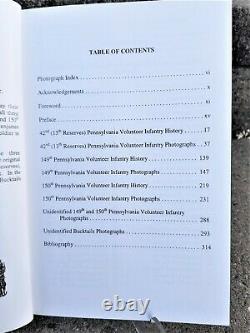 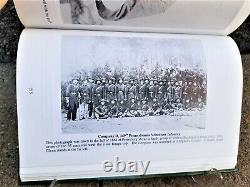 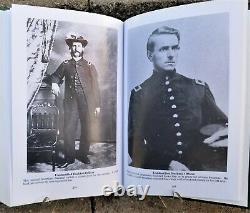 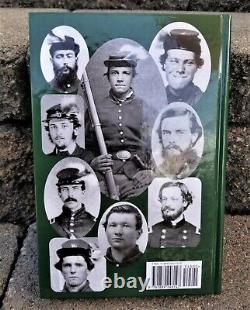 Being offered is a book. Pennsylvania Bucktails A Photographic Album of the 42nd, 149th & 150th Pennsylvania Regiments.

This book is very clean and crisp, it looks to be in like new condition. Publisher: Schroeder Publications: Civil War Publication Date 2001 Hard cover book 318 pages. The 42nd Pennsylvania Volunteer Infantry (13th Reserves) were known as the Bucktails (Civil War).

These men adorned their own caps with bucktails and were thus set apart from the typical Federal soldier by their distinctive plumage. These Pennsylvanians saw action early in the war at Drainesville under the command of Col.

Thomas Kane, who later fought with four companies in the Shenandoah Valley, while Major Roy Stone led the additional six companies on the Virginia Peninsula with the Army of the Potomac-both contingents rendering distinguished service. Kane's men figured prominently at Harrisonburg, Cross Keyes, and Cedar Mountain, while Stone's soldiers were equally gallant at Mechanicsville, Gaines' Mill and Charles City Crossroads. Upon reunification of the regiment, they consistently displayed consistent courage and tactical ability on the battlefields of Second Bull Run, South Mountain, Antietam, Fredericksburg, Gettysburg, The Wilderness, and Spotsylvania.

Sometimes the Bucktails stood and fought in a line of battle, but often were detailed as skirmishers and sharpshooters where they could employ their deadly talents more effectively until mustering out on June 11, 1864. The gallant service of the original Bucktails led to the call in the summer of 1862 for an entire brigade of Bucktailed regiments.

Initially called into service during the 1862 Maryland Campaign, the two regiments were posted for a time in the vicinity of Washington, DC. One company had the illustrious honor to be assigned the duty of protecting President Abraham Lincoln.

The greatest trial by fire for these two regiments came at Gettysburg on July 1, 1863. Serving side by side in the same brigade, the next blood-letting for the 149th and 150th came during the horrendous fighting at the Battle of The Wilderness in early May 1864.

They continued on with the Army of the Potomac through the actions at Spotsylvania, and Petersburg, especially along the Weldon Railroad. With the numerical strength of each regiment greatly reduced, they were withdrawn from the lines and sent to Elmira, New York, in February 1865. The Bucktails did the Keystone State proud and earned a noted place in the pantheon of Civil War regiments.

Their legacy has had the admiration of many over the years and their fame remains strong today. This book is an extensive photographic look at the three Bucktail regiments, that contains 264 images of these noted soldiers. Each soldier included in the book has been extensively researched, and a detailed biographical sketch is given about each identified Bucktail. Complete with capsule unit histories and a photo index.

This item is in the category "Books & Magazines\Books". The seller is "harrysdiamond" and is located in this country: US. This item can be shipped to United States.