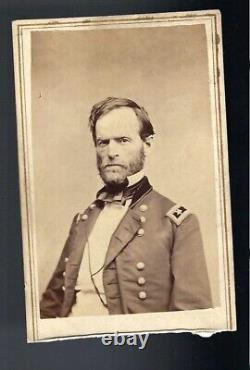 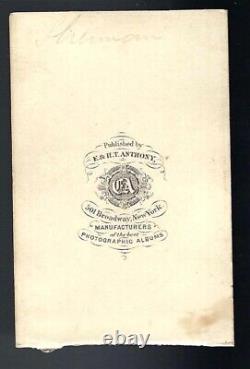 William Tecumseh Sherman, although not a career military commander before the war, would become one of the most widely renowned of the Union's military leaders next to U. Sherman, one of eleven children, was born into a distinguished family. His father had served on the Supreme Court of Ohio until his sudden death in 1829, leaving Sherman and his family to stay with several friends and relatives.

During this period, Sherman found himself living with Senator Thomas Ewing, who obtained an appointment for Sherman to the United States Military Academy, and he graduated sixth in the class of 1840. His early military career proved to be anything but spectacular. He saw some combat during the Second Seminole War in Florida, but unlike many of his colleagues, did not fight in the Mexican-American War, serving instead in California. As a result, he resigned his commission in 1853.

He took work in the fields of banking and law briefly before becoming the superintendent of the Louisiana Military Academy in 1859. At the outbreak of the Civil War, however, Sherman resigned from the academy and headed north, where he was made a colonel of the 13th United States Infantry.

Sherman first saw combat at the Battle of First Manassas, where he commanded a brigade of Tyler's Division. Although the Union army was defeated during the battle, President Abraham Lincoln was impressed by Sherman's performance and he was promoted to brigadier general on August 7, 1861, ranking seventh among other officers at that grade. He was sent to Kentucky to begin the Union task of keeping the state from seceding.

While in the state, Sherman expressed his views that the war would not end quickly, and he was replaced by Don Carlos Buell. Sherman was moved to St.

At the Battle of Chattanooga Sherman faced off against Confederates under Patrick Cleburne in the fierce contest at Missionary Ridge. Grant was promoted to commander of all the United States armies, Sherman was made commander of all troops in the Western Theatre, and began to wage warfare that would bring him great notoriety in the annals of history. By 1864 Sherman had become convinced that preservation of the Union was contingent not only on defeating the Southern armies in the field but, more importantly, on destroying the Confederacy's material and psychological will to wage war. To achieve that end, he launched a campaign in Georgia that was defined as "modern warfare", and brought total destruction. Upon the civilian population in the path of the advancing columns [of his armies]. Commanding three armies, under George Henry Thomas, James B. Schofield, he used his superior numbers to consistently outflank Confederate troops under Joseph E.

Johnston, and captured Atlanta on September 2, 1864. The success of the campaign ultimately helped Lincoln win reelection.

After the fall of Atlanta, Sherman left the forces under Thomas and Schofield to continue to harass the Confederate Army of Tennessee under John Bell Hood. Meanwhile, Sherman cut off all communications to his army and commenced his now-famous "March to the Sea, " leaving in his wake a forty to sixty mile-wide path of destruction through the heartland of Georgia. On December 21, 1864 Sherman wired Lincoln to offer him an early Christmas present: the city of Savannah. Its glory is all moonshine.

It is only those who have neither fired a shot nor heard the shrieks and groans of the wounded who cry aloud for blood, for vengeance, for desolation. Following his successful campaign through Georgia, Sherman turned his attentions northward and began marching through the Carolinas, chasing the Confederates under the command of Joseph E. He continued his campaign of destruction, in particular targeting South Carolina for their role in seceding from the Union first. He captured Columbia, South Carolina, on February 17, 1865, setting many fires which would consume large portions of the city. He went on to defeat the forces of Johnston in North Carolina during the Battle of Bentonville, and eventually accepted the surrender of Johnston and all troops in Georgia, Florida, and the Carolinas on April 26, 1865, becoming the largest surrender of Confederate troops during the war.

After the war, Sherman remained in the military and eventually rose to the rank of full general, serving as general-in-chief of the army from 1869 to 1883. Praised for his revolutionary ideas on "total warfare, " William T. Photograph of Brigadier General Micah Jenkins. Battle of Resaca: Botched Union Attack.