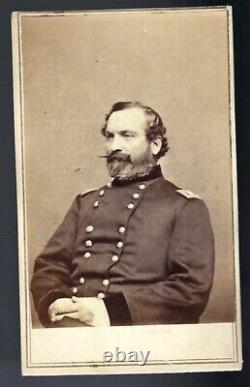 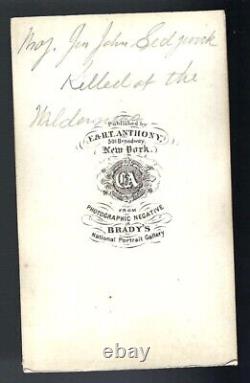 John Sedgwick was born September 13, 1813 in Cornwall Hollow in the Berkshire Mountains of northwest Connecticut. He attended the Sharon Academy, and taught for two years himself, before receiving an appointment to the U. Military Academy at West Point. Sedgwick graduated in 1837, in the middle of a prodigious class that included Braxton Bragg, Jubal Early, John C. He was commissioned a second lieutenant in the artillery, and went on to fight the Seminoles in Florida and aid in the removal of the Cherokee Nation from Georgia. Sedgwick performed admirably in the Mexican War. Serving under both Zachary Taylor and Winfield Scott, he was brevetted twice: first for his actions at the battles of Contreras and Churubusco, then again, three weeks later, at the storming of Chapultepec. Returning home, Sedgwick was assigned to the newly-created 1st Cavalry.

In the 1850s, as the nation lurched inexorably toward Civil War he, like most in the regular army, was stationed on the western frontier. At the outbreak of the Civil War in 1861, Sedgwick reported to Washington D. To serve as acting inspector general of the city, and was promoted to brigadier general of volunteers in August. He commanded a division in Edwin "Bull" Sumner's Corps during Gen.

George McClellan's Peninsula campaign, and was wounded in the arm and the leg at the Battle of Frayser's Farm (Glendale) on June 30, 1862. He was promoted to major general on the 4th of July. At the battle of Antietam Sedgwick's division was decimated by artillery and a powerful Confederate flank attack. Sedgwick himself displayed tremendous gallantry, however, and was wounded three times and had a horse shot from under him before being carried unconscious from the field. "Uncle John, " as his men affectionately dubbed him, reported back for duty less than 90 days later.

Following his return, with his former classmate Joseph Hooker now leading the Army of the Potomac, Sedgwick was given command of the VI Corps. During the Chancellorsville Campaign in May 1863, Sedgwick's men successfully stormed Marye's Heights above Fredericksburg - which was defended by another of his West Point classmates: Jubal Early -- but were unable to prevent a disastrous Union defeat at Chancellorsville. Sedgwick's VI Corps was mostly held in reserve at Gettysburg, but performed exceptionally at the battle of Rappahannock Station in November, capturing four field pieces, eight stands of enemy colors and 1,700 prisoners. In the early summer of 1864, Sedgwick led his corps with typical reliability at the outset of Grant's Overland campaign. At the battle of Spotsylvania Courthouse, he was personally directing artillery placements and forming his line when he uttered his last, now famous, words, They couldn't hit an elephant at this distance.

Just then, in a moment of profound irony, he was struck and killed by a Confederate bullet. When Grant heard the news he could hardly believe it, repeatedly asking, Is he really dead?

John Sedgwick was the highest-ranking Union casualty of the war, and widely beloved by his soldiers and his superiors. He is buried near his home in Cornwall Hollow.