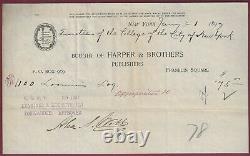 Descended from a prominent military family he graduated from West Point in 1855. He was sent to Florida to fight in the Seminole War. He would later serve as a mathematics instructor at West Point.

At the Battle of Gettysburg, though wounded in the thigh and groin he showed exceptional personal courage in the face of Pickett's charge. He was awarded the Medal of honor for his service, and received the brevet rank of Major General, an appointment of President Abraham Lincoln, confirmed by the US Senate.

Following the war he would also be breveted by President Andrew Johnson as a Brigadier General and Major General, both ranks also confirmed by the Senate. Following his military career he would go on to serve as President of City College of New York for 33 years. His signature as approval on an order of books from Harper & Brothers Publishers dated January 21, 1897. UACC Registered Dealer # 036, Pages of History, provides a lifetime guarantee of authenticity.

We are full time autograph and document dealers, UACC Registered Dealer No. 036, and members of the Manuscript Society. Payments must be by Pay Pal. This item is in the category "Collectibles\Autographs\Historical". The seller is "history*plus" and is located in this country: US.