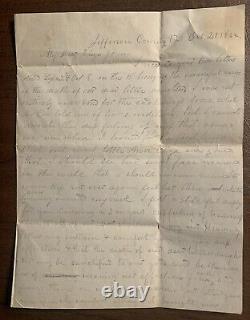 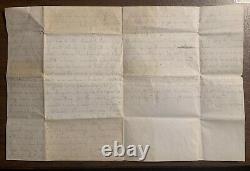 4th Virginia Cavalry Civil War Letter W. Some light staining but very readable. This letter is written from William Ranson of the 4th Virginia Cavalry to his wife Eliza Jane on October 21, 1862 at Jefferson County Va. He is very sad from the mournful news of the death of their little daughter, he was not unprepared due to a Mrs. Cox had told him of her condition.

There little Ann Eliza was gone and her sweet face he would no more see. He feels very bad also for his wife.

Wickham promised him when he first applied for a discharge to go home as soon as the surgeon made his report of his case without for the Union forms. The next time he saw him he said he would see General Stuart the next day.

William asked him again and was told he would see Stuart in a few days. Their brigade went on a six day scout into Maryland and Pennsylvania.

He was told again he would ask Stuart again. He does not expect to leave until McKinney comes back to the company. He writes that Lieutenant Meredith is the only officer dont get along with Wickham dont never have anything to say to him unless has business, there is no love lost between them.