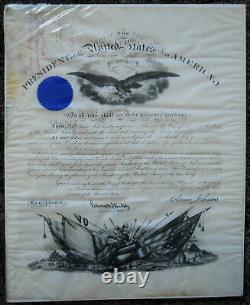 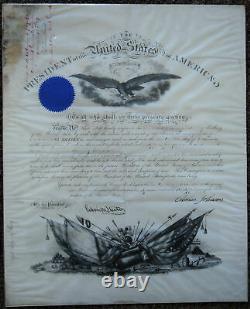 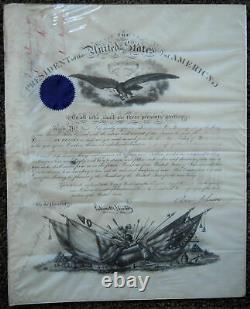 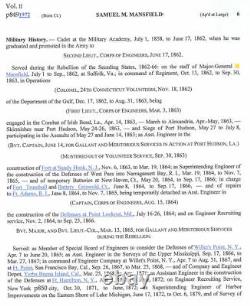 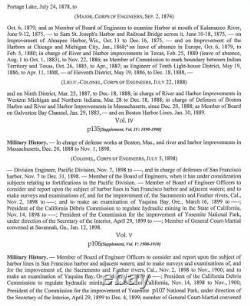 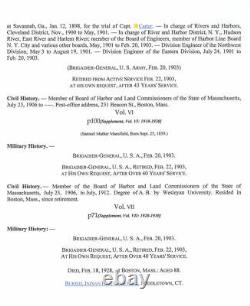 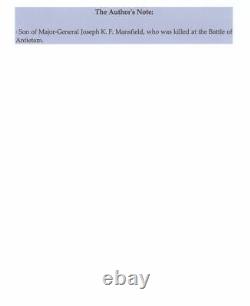 Available is an outstanding lot or group of three original brevet commissions or appointment documents given in 1866 and 1867 to an officer for his Civil War service. Each of the original vellum documents measures approximately 15 ½ inches wide and 19 inches tall.

They are dated 1866 or 1867 and bear the stamped signatures of President Andrew Johnson and Secretary of War Edward Stanton. The first document was issued on 20 August 1866 and was presented to Samuel M. Mansfied who was appointed a Captain by Brevet on 14 June 1863 for gallant and meritorious services in action at Port Hudson, Louisiana. The second document was issued on 13 March 1867 and was presented to Samuel M.

Samuel Mansfield had a long and distinguished career. He was born in Connecticut on 25 September 1839 and was the son of Joseph K.

The elder Mansfield was a Major General during the Civil War who was mortally wounded and died during the Battle of Antietam. Like his father that graduated in 1822, Samuel entered the United States Military Academy at West Point on 1 July 1859 and served there until 17 June 1862. At that time, he graduated sixth in his class and became a Second Lieutenant in the Corps of Engineers. His first assignment after graduation was on the staff of his father at Suffolk, Virginia from 1 July to the end of September 1862. After the death of his father, on 13 October was placed in Command of a Regiment, promoted to Colonel of the 24th.

Connecticut Volunteers and served in operations in the Department of the Gulf through 30 September 1863. During that time he was engaged at Irish Bend, La. (14 April 1863), the March to Alexandria (April-May 1863), skirmishes near Port Hudson (24-26 May 1863), the siege of Port Hudson (27 May to 8 July 1863) and participated in the assaults of 27 May and 14 June 1863. During that time, he was promoted to First Lieutenant on 3 March 1863, promoted to Brevet Captain on 14 June 1863 for Gallant and Meritorious Services in Action at Port Hudson, and mustered out of volunteer service on 30 September 1863. His next assignment was the Assistant Engineer in the construction of the fort at Sandy Hook, New Jersey from 6 November 1863 to 19 March 1864. This was followed up as Superintendent Engineer of the construction of the Defenses of West Pass into Narragansett Bay, Rhode Island from 19 March 1864 to 7 November 1865, and of temporary batteries at New Haven, Connecticut from 20 May 1864 to 17 September 1866. During the same time, he was in charge of Fort Trumbull and Battery Griswold in Connecticut from 8 June 1864 to 17 September 1866. After the Civil War he served in a wide variety of engineering assignments until his retirement. He was promoted to a Brevet Major and Lt. Colonel on 13 March 1865 for Gallant and Meritorious Services during the Rebellion (three total Brevets), Major, Corps of Engineers on 2 September 1874, Lt. Colonel, Corps of Engineers, on 22 July 1888, Colonel, Corps of Engineers, on 5 July 1898, Brigadier General, U.

Army on 20 February 1903, and eventually retired on 22 February 1903 from active service at his own request after 43 years of service. General Mansfield passed on 18 February 1928 in Boston, Massachusetts and was laid to rest in the Indian Hill Cemetery in Middletown, Connecticut.

He was 88 years old at the time of his death. All of the Generals service that was taken from the Cullums registers and can be find using an Internet search. I also printed off and put the information from this site in the pictures.

Each of the documents has been shrink wrapped individually against a piece of cardboard. They show the standard folds, wrinkles, and fading to the ink that most commissions of this age do.

In addition, it appears that the upper left hand corner of each the documents became damp at some point. This is especially evident on the Majors Brevet as it shows some staining. It appears that the contact with water was very limited to the corner and to a far lesser extent, the left hand margin. It also appears that this happened long ago.

Overall, I would grade them as being in good condition. The item "3 Civil War Brevet Commissions to West Point Officer & General President Johnson" is in sale since Sunday, January 31, 2021. This item is in the category "Collectibles\Militaria\Civil War (1861-65)\Original Period Items\Documents". The seller is "mgthomas68" and is located in Pine Bluffs, Wyoming. This item can be shipped to United States.