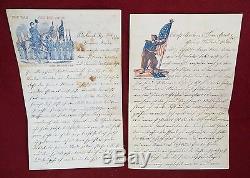 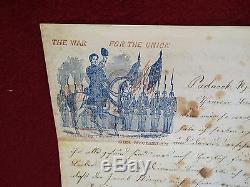 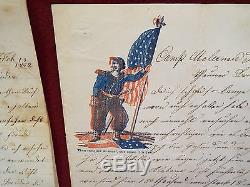 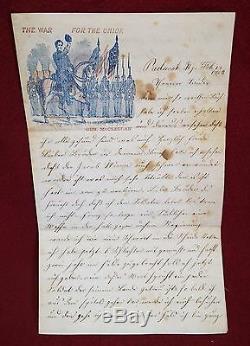 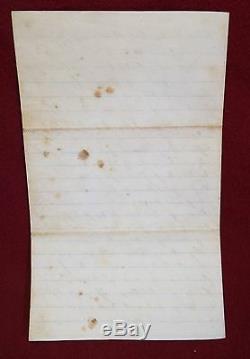 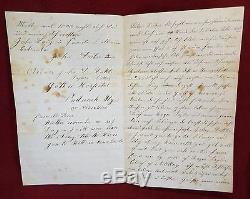 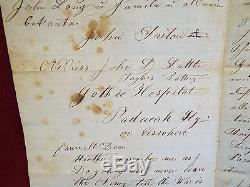 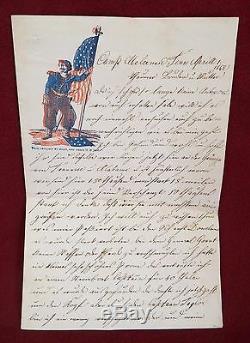 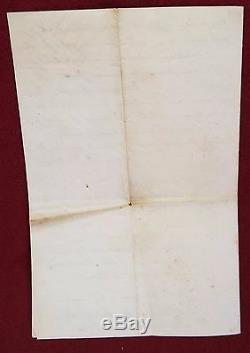 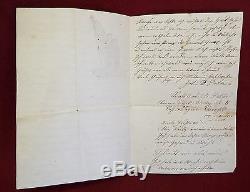 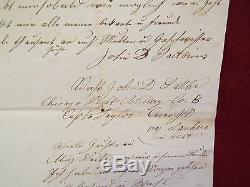 Presented for your consideration is this pair of letters from the Civil War. The letters are from a Union Army soldier and are written in German.

Most likely written to a German immigrant relative of the soldier. Each is written on Union Army stationary. One letter depicts General McClellan and reads The War For the Union.

The other letter shows a soldier with two U. Flags and reads Then Conquer We Must, Our Cause It Is Just. Both were written by a John D. One of the addresses is to a John D. Lattler, Chicago Light Artillery Co.

B Captain Taylor Cairo HO and the other is of the same name but the location of Taylor's Battery Gothco? 13, 1863 and April 1, 1862. The 1862 letter was written in Tennessee and is discussing the size of the troops for each side and how the confederates are only 18 miles away from the Union camp. It is possible that he is talking about the Siege of Yorktown that would begin on April 5th.

This letter also mentions General Grant twice and how strict he was and how certain things were forbidden. A Captain Taylor is also mentioned several times. This could be referring to the Union officer and Medal of Honor recipient, William Taylor.

Besides the war, the soldier talks about the weather and how warm it currently was in Tennessee (where the letter was written from). The 1863 letter was written in Paducah, Kentuchy and was written during the Battle of Fort Donelson. It is possible that this letter is talking about the battle. It mentions Chicago and the Gulf of Mexico several times. Possibly in reference to the Illinois Central Railroad which funneled troops and supplies south to open the Mississippi River to the Gulf of Mexico. The letter also mentions a Jacob Werner who was a Union Private in the 75th Regiment of the Pennsylvania Infantry.

A short paragraph of the letter is written in English and reads Farewell Dear. Brother remember me as J.

I will never leave the Army till the war is gone to Hell or somewhere else. Johnny Sattler I was you to go to Chicago and stay at my house until you get well. Ask another favor from me by orders of Major Taylor, Chief of Artillery.

This is referring to Major Ezra Taylor who was the Chief of Artillery and part of Battery B, 1st Illinois Light Artillery. These letters would make a great addition to any Civil War or military memorabilia collection!

The letters are creased from when they were folded at one point and show some light to mild foxing. The 1862 letter has a small hole where the creases come together and a tiny tear in the edge. Otherwise, free of rips or tears. Overall in VERY GOOD condition for their age.

Please refer to the photos for the best details. Each measures 5" wide and 8" long when folded in half.

Please take a look at our photos and feel free to message us with any questions. These charges are the buyers responsibility. We do not mark merchandise values below value or mark items as gifts - US and International government regulations prohibit such behavior.

This item is being offered by: The Hitching Post Antiques Mall. We are located 2 miles west of beautiful Tecumseh, Michigan, on M-50 near the intersection of M-52.

Our store operates seven days a week, 361 days a year, during the hours of 10:00 a. - Your Friends at the Hitching Post Antiques Mall. Please check out my other items. And be sure to add me to your favorites list. Please note that we try our hardest to assure accurate descriptions of the items we list.

Thank you and good luck! The item "2 Antique CIVIL WAR LETTERS on UNION STATIONARY General McClellan GENERAL GRANT" is in sale since Monday, November 7, 2016. This item is in the category "Collectibles\Militaria\Civil War (1861-65)\Original Period Items\Correspondence, Mail". The seller is "hitchingpostantiques" and is located in Tecumseh, Michigan. This item can be shipped worldwide.