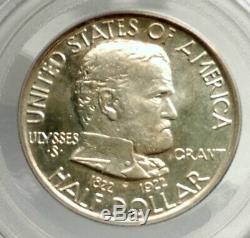 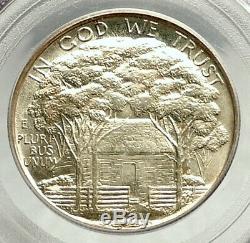 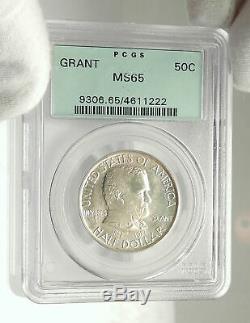 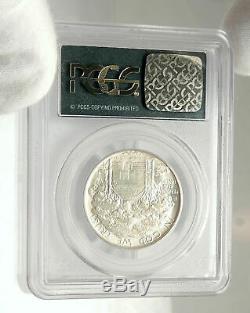 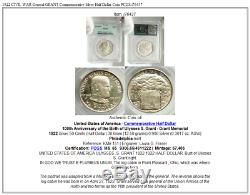 Item: i76437 Authentic Coin of. United States of America - Commemorative Half Dollar.

The reverse shows the log cabin he was born in on April 27, 1822. Grant served as a general of the Union Armies of the north and two terms as the 18th president of the United States.

Grant (born Hiram Ulysses Grant ; April 27, 1822 - July 23, 1885) was an American politician, soldier, international statesman, and author, who served as the 18th president of the United States from 1869 to 1877. During the American Civil War Grant led the Union Army as its commanding general to victory over the Confederacy with the supervision of President Abraham Lincoln.

During the Reconstruction Era President Grant led the Republicans in their efforts to remove the vestiges of Confederate nationalism, racism, and slavery. From early childhood in Ohio, Grant was a skilled equestrian who had a talent for taming horses.

He graduated from West Point in 1843 and served with distinction in the Mexican-American War. Upon his return, Grant married Julia Dent, and together they had four children. In 1854, Grant abruptly resigned from the army. He and his family struggled financially in civilian life for seven years. When the Civil War broke out in 1861, Grant joined the Union Army and rapidly rose in rank to general.

Grant was persistent in his pursuit of the Confederate enemy, winning major battles and gaining Union control of the Mississippi River. In March 1864, President Abraham Lincoln promoted Grant to Lieutenant General, a rank previously reserved for George Washington. For over a year Grant's Army of the Potomac fought the Army of Northern Virginia led by Robert E. Lee in the Overland Campaign and at Petersburg.

On April 9, 1865, Lee surrendered to Grant at Appomattox, and the war ended. On April 14, 1865, Lincoln was assassinated. Grant continued his service under Lincoln's successor President Andrew Johnson, and was promoted General of the Army in 1866. Disillusioned by Johnson's conservative approach to Reconstruction, Grant drifted toward the "Radical" Republicans. Elected the youngest 19th Century president in 1868, Grant stabilized the post-war national economy, created the Department of Justice, and prosecuted the Ku Klux Klan.

He appointed African-Americans and Jewish-Americans to prominent federal offices. In 1871, Grant created the first Civil Service Commission. The Democrats and Liberal Republicans united behind Grant's opponent in the presidential election of 1872, but Grant was handily re-elected. Grant's new Peace Policy for Native Americans had both successes and failures. Grant's administration successfully resolved the Alabama claims and the Virginius Affair, but Congress rejected his Dominican annexation initiative.

Grant's presidency was plagued by numerous public scandals, while the Panic of 1873 plunged the nation into a severe economic depression. After Grant left office in March 1877, he embarked on a two-and-a-half-year world tour that captured favorable global attention for him and the United States.

In 1880, Grant was unsuccessful in obtaining the Republican presidential nomination for a third term. In the final year of his life, facing severe investment reversals and dying of throat cancer, he wrote his memoirs, which proved to be a major critical and financial success.

At the time of his death, he was memorialized as a symbol of national unity. Historical assessments of Grant's legacy have varied considerably over the years. Historians have hailed Grant's military genius, and his strategies are featured in military history textbooks. Stigmatized by multiple scandals, Grant's presidency has traditionally been ranked among the worst.

Modern scholars have shown greater appreciation for his achievements that included civil rights enforcement and has raised his historical reputation. Grant has been regarded as an embattled president who performed a difficult job during Reconstruction. World-renowned expert numismatist, enthusiast, author and dealer in authentic ancient Greek, ancient Roman, ancient Byzantine, world coins & more. Ilya Zlobin is an independent individual who has a passion for coin collecting, research and understanding the importance of the historical context and significance all coins and objects represent. Send me a message about this and I can update your invoice should you want this method.

Getting your order to you, quickly and securely is a top priority and is taken seriously here. Great care is taken in packaging and mailing every item securely and quickly. What is a certificate of authenticity and what guarantees do you give that the item is authentic? You will be very happy with what you get with the COA; a professional presentation of the coin, with all of the relevant information and a picture of the coin you saw in the listing. Additionally, the coin is inside it's own protective coin flip (holder), with a 2x2 inch description of the coin matching the individual number on the COA.

Whether your goal is to collect or give the item as a gift, coins presented like this could be more prized and valued higher than items that were not given such care and attention to. When should I leave feedback? Please don't leave any negative feedbacks, as it happens sometimes that people rush to leave feedback before letting sufficient time for their order to arrive. The matter of fact is that any issues can be resolved, as reputation is most important to me. My goal is to provide superior products and quality of service.

How and where do I learn more about collecting ancient coins? Visit the Guide on How to Use My Store. For on an overview about using my store, with additional information and links to all other parts of my store which may include educational information on topics you are looking for.

The item "1922 CIVIL WAR General GRANT Commemorative Silver Half Dollar Coin PCGS i76437" is in sale since Saturday, March 9, 2019. This item is in the category "Coins & Paper Money\Coins\ US\Commemorative\Silver (1892-1954)". The seller is "highrating_lowprice" and is located in Rego Park, New York. This item can be shipped worldwide.