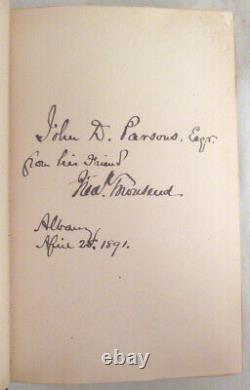 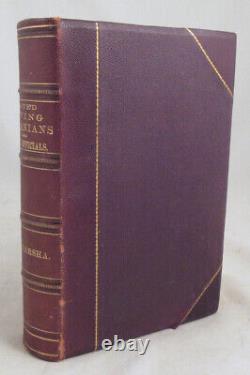 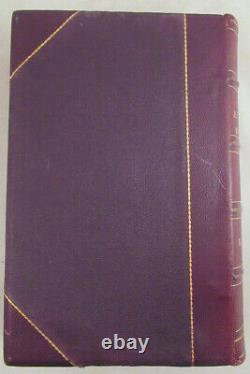 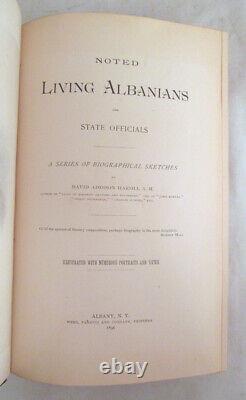 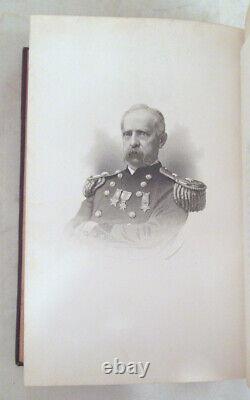 On April 25, 1891 Civil War General Frederick Townsend inscribed and signed this book. Noted Living Albanians and State Officials. Townsend himself appears in one of author David Addison Harsha's "Biographical Sketches" alongside a portrait in his military uniform.

Gilt-stamped half-leather binding with brown cloth over boards, four raised bands, 524 pages, illustrated with numerous engraved portraits. Published in 1891 by Weed, Parsons and Company of Albany, NY. 9 1/2" x 6 1/2". During the Civil War, Frederick Townsend founded and was Colonel of the 3rd New York Infantry Regiment, and later served with the 18th and 9th Infantries, where he was brevetted a Brigadier General.

He saw action at the Battle of Big Bethel, Battle of Lick Creek, Mississippi, the Siege of Corinth, and the Battle of Perryville. He served three terms as Adjutant-General of New York, from 1857 to 1861, and again in 1880. Condition: Scuffs on covers, small amount of water-staining along top edges of pages near the back of the book, rare instances of light scattered foxing. Bit of a musty smell. Generally good condition with a large, bold signature. A note about packing: Please check our feedback. We take pride in our excellent packing. We double-box all fragile items to insure their safe journey through the postal system. We do not mark merchandise values below value or mark items as "gifts" - US and International government regulations prohibit such behavior.

This item is in the category "Collectibles\Autographs\Military". The seller is "dholz" and is located in this country: US. This item can be shipped to North, South, or Latin America, all countries in Europe, all countries in continental Asia, Australia, South Africa, New Zealand, Egypt, Reunion.