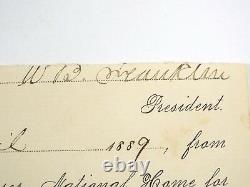 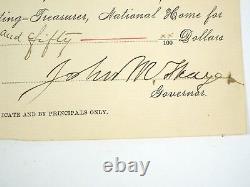 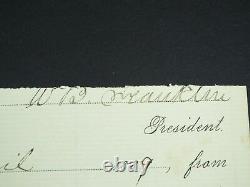 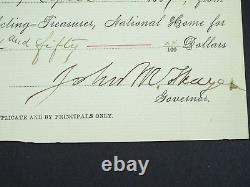 This receipt is signed at the top by William Buel Franklin. And at the bottom by John Milton Thayer.

William Franklin was a Civil War Union Army Brigadier General of Volunteers. He commanded a brigade at First Bull Run.

He saw action at Crampton's Gap during the Battle of South Mountain. After clearing Crampton's Gap he prepared to strike the rear of Stonewall Jackson's troops who were attacking Harpers Ferry. During the Battle of Fredericksburg, he commanded one of the three grand divisions(the left). He advanced against Stonewall Jackson across the Rappahannock River to the south of Fredericksburg. After the war he became. Of Colt Firearms Manufacturing Company and then. In 1872 he was asked to run for the. Democratic Party's Presidential nominee but declined.

It was during this time that he signed this receipt as president and acting treasurer. John Thayer was a Civil War Union Army Colonel and then promoted to. General and Major General of Volunteers. He commanded a brigade in the battles of Fort Donelson and Shiloh. He saw action in the battles of Chickasaw Bayou.

Grant appointed him Governor of the Wyoming Territory. In 1886, he was elected Governor of Nebraska serving 2 full terms and part of a third.

It was during this time that he signed this receipt as Governor of Nebraska. Please visit our store for more collectible items. We strive for nothing less than 5 star feedback and 100% satisfied buyers. Check out our other items, we offer many quality items ranging from antiques to electronics and we add new listings everyday. This item is in the category "Collectibles\Autographs\Military".