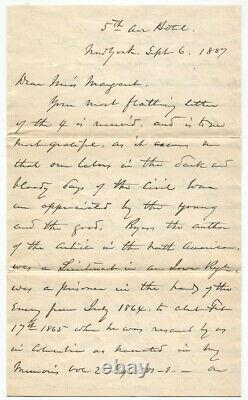 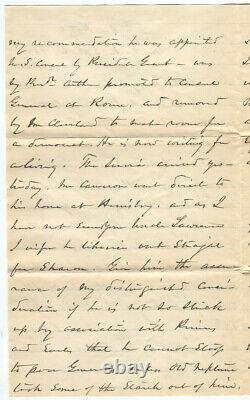 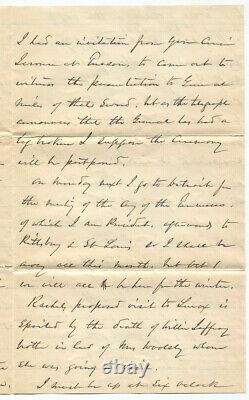 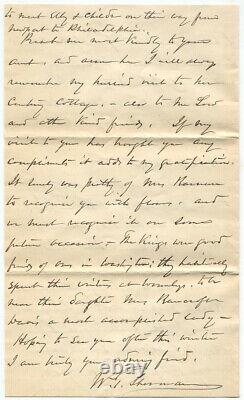 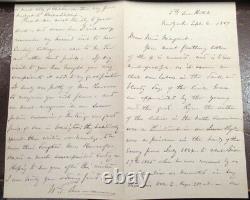 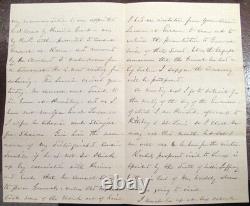 In this four-page autograph letter signed Sherman writes to his friend Margaret Middleton commenting on events of the Civil War. He states in part: Your most flattering letter... Is to me most gratifying? , as it assures me that our labors in the dark and bloody days of the Civil War are appreciated by the young and the good. Byers the author of the article in The North American was a Lieutenant in an Iowa Regt. Was a prisoner in the hands of the enemy from July 1864 to about Feb. 17th 1865 when he was rescued by us in Columbia as narrated in my memoirs Vol. 2 pages 281-3-- On my recommendation he was appointed U. Consul by President Grant -- was by President Arthur promoted to Consul General at Rome and removed by? Cleveland to make room for a democrat. He is now writing for a living... From Sherman's memoir: After we had got, as it were, settled in Blanton Duncan's house, say about 2 p. I overhauled my pocket according to custom, to read more carefully the various notes and memoranda received during the day, and found the paper which had been given me, as described, by one of our escaped prisoners. It proved to be the song of "Sherman's March to the Sea, " which had been composed by Adjutant S. Byers, of the Fifth Iowa Infantry, when a prisoner in the asylum at Columbia, which had been beautifully written off by a fellow-prisoner, and handed to me in person. This appeared to me so good that I at once sent for Byers, attached him to my staff, provided him with horse and equipment, and took him as far as Fayetteville, North Carolina, whence he was sent to Washington as bearer of dispatches. He is now United States consul at Zurich, Switzerland, where I have since been his guest. Further on in the letter he mentions his invitation to an event -- General Nelson Miles receiving a presentation sword. He writes: I had an invitation from your cousin Jerome? At Tucson, to come out to witness the presentation to General Miles of that sword, but as the Telegraph announces that the General has had a leg broken I suppose the ceremony will be postponed.

Miles ultimately received the sword from the State of Arizona in recognition of his services in connection with the capture of the Native American chief Geronimo and the removal of the hostile Apaches from the State. In April of 1886 Miles had become Commander of the Dept.

Of Arizona, replacing General George Crook. He rejoined the military for the US Civil War, becoming one of its most famous generals for leading Union troops across the south in "scorched earth" campaigns. After the War, he continued his military career and was promoted to General of the Army, his troops primarily fighting Native Americans along the wagon trails and railroads. In retirement, he was a constant presence at New York's theatres, lectures, and galleries, and also occasionally thrilled audiences at speaking engagements.

She also dedicated a portion of her time to work with charitable organizations. Like Sherman, she was an aficionado of theatre and the arts. Although she was nearly three decades younger than Sherman, the two struck up a close relationship in the 1880s based on their common interests, and often attended events together. It seems they may have been introduced by mutual friend, Mary Thompson Hunt, whose 1884 death brought them closer. Written on four sides of a folded 9 1/4" x 11" sheet of ruled paper.

We take pride in our excellent packing. We double-box all fragile items to insure their safe journey through the postal system. We do not mark merchandise values below value or mark items as "gifts" - US and International government regulations prohibit such behavior. This item is in the category "Collectibles\Autographs\Military". The seller is "dholz" and is located in this country: US. This item can be shipped worldwide.